Achim von Arnim, founder of The Haute Cabrière Wine Estate once told me that it is a tradition in France that a Champagne House will name its Champagne after the first owner of the land. In the case of the Haute Cabrière Wine Estate in the beautiful Franschhoek Wine Appellation, this person was Pierre Jourdan, a French Huguenot, to whom the land was first granted. The Pierre Jourdan Méthode Cap Classique Brut nv was first produced by Achim in 1986, the first MCC in the Haute Cabrière range of wines. Achim was one of the Cape’s early pioneers of this style of wine. Now under the Cellarmastership of Achim and Hildegard von Arnim’s son, Takuan, the range has further expanded, now to include two demi sec wines which are finding great favour. 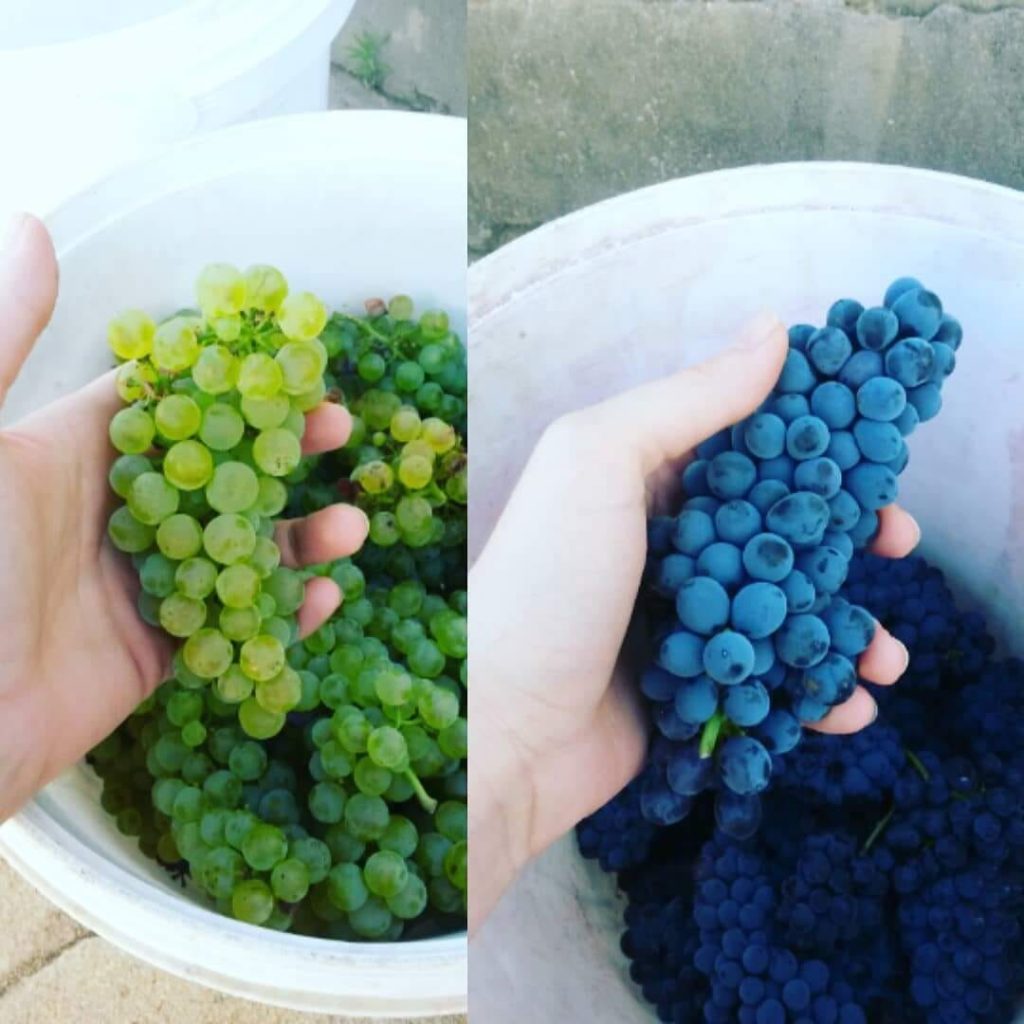 The grapes for this wine are Chardonnay 85% and Pinot Noir 15%, the two great grape varieties of both Champagne and Bordeaux. The base wines are made from early picked grapes, are blended, bottled and then inoculated with a ‘liqueur de tirage’, a little shot of specialized yeast and sugar to create a second fermentation in the bottle. It is during this fermentation that the tiny bubbles are created and the lying on the lees which creates the traditional yeast, fresh baked almond biscotti whiffs when you lift the glass to your nose. Once the wine has undergone its maturation, it is degorged, the ‘Champagne’ cork and the little wire muzzle applied.

Pour
From a tradition Champagne shaped bottle closed with natural cork and the wire muzzle, known in French as a ‘museliére’. The label recently gussied up is elegant and befitting of a wine of this stature. In the glass, the wine is a pale gold in colour with many of the tiniest bubbles rushing headlong to the surface and forming a crown round the edges of the glass. The aromas are of fresh red fruit, sliced Granny Smith apples and the yeasty biscotti. The palate is vibrant, the result of the bubbles, full and generous. The aftertaste is crisp and dry and very satisfying. The wine is ready for drinking now. Don’t keep it for a special occasion, the special occasion is having a bottle in your fridge for opening at any time. 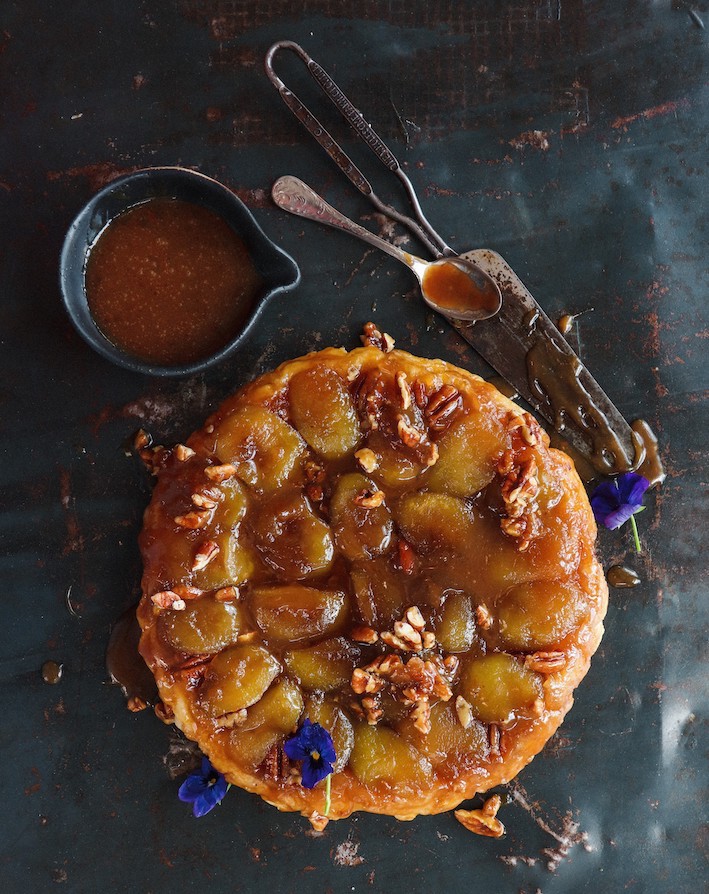 Pair
The Pierre Jourdan Méthode Cap Classique Brut should be served well chilled and as I said earlier an any time wine. An aperitif, a midmorning refresher or a sundown sipper. Traditional foods to go with an MCC are oysters, prawns, smoked salmon. As snacks it is great with fat green salty olives and butter fried almonds. It will take you happily through most course of a meal. At the end of the meal, it will be a great partner to Christine Capendale’s Apple Tarte Tatin. Such a classical French dessert.

Tarte Tatin with Apple & Pecans – With A Butterscotch Sauce

This is the BEST Tarte Tatin recipe I have ever tasted! It is very delicious when warm – fresh out of the oven but also taste great the next day.  I normally prep the tart a few hours ahead and just pop it into the oven 45 minutes before serving.  The butterscotch sauce is a wonderful, rich accompaniment to this simple tart – you can store any leftover sauce in the fridge for up to a month

Method
Mix together the ingredients for the butterscotch sauce in a small saucepan on medium heat, stir to melt the sugar and cook until it is thick and a syrup (110°C)  Optional to stir in 5 ml Maldon salt.  (TIP – do not allow mixture to boil before all the sugar has dissolved.)

Melt the 125 g butter and castor sugar together and cook until caramelised in the pan you are going to use to make your Tart Tatin.  It must be ovenproof (TIP – use a non-stick pan and do not stir the mixture – just swirl the pan)

Remove from the heat and place the apples neatly in the caramel.  Scatter with half of the pecan nuts. Cool

Cover with the puff pastry and tuck in the pastry so that the fruit is contained.  Cut a slit in the centre of the pastry to let out steam.

Bake in the oven for about 25 minutes.  Remove from oven, then place a serving dish on top of the pan and carefully turn upside down (work quickly and be very careful!). Remove the pan. If any fruit has moved out of place, now is the time to carefully put them back in place if necessary.

Return the pan to the heat, and quickly toss the pecan nuts in the remaining caramel sauce for a few seconds. Add the pecans to the tart. Cool and serve with crème fraiche, whipped cream or ice cream and the butterscotch sauce. 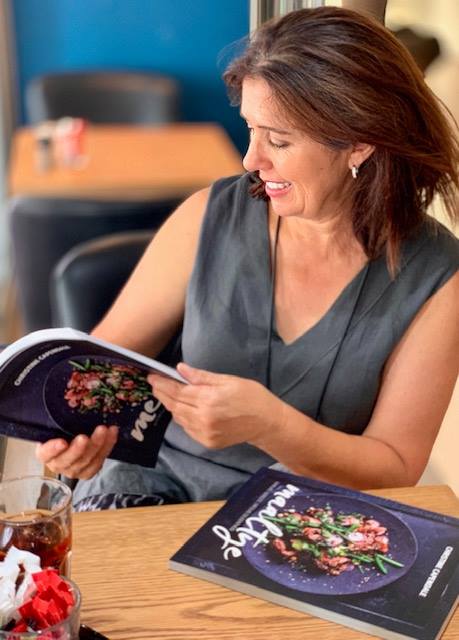