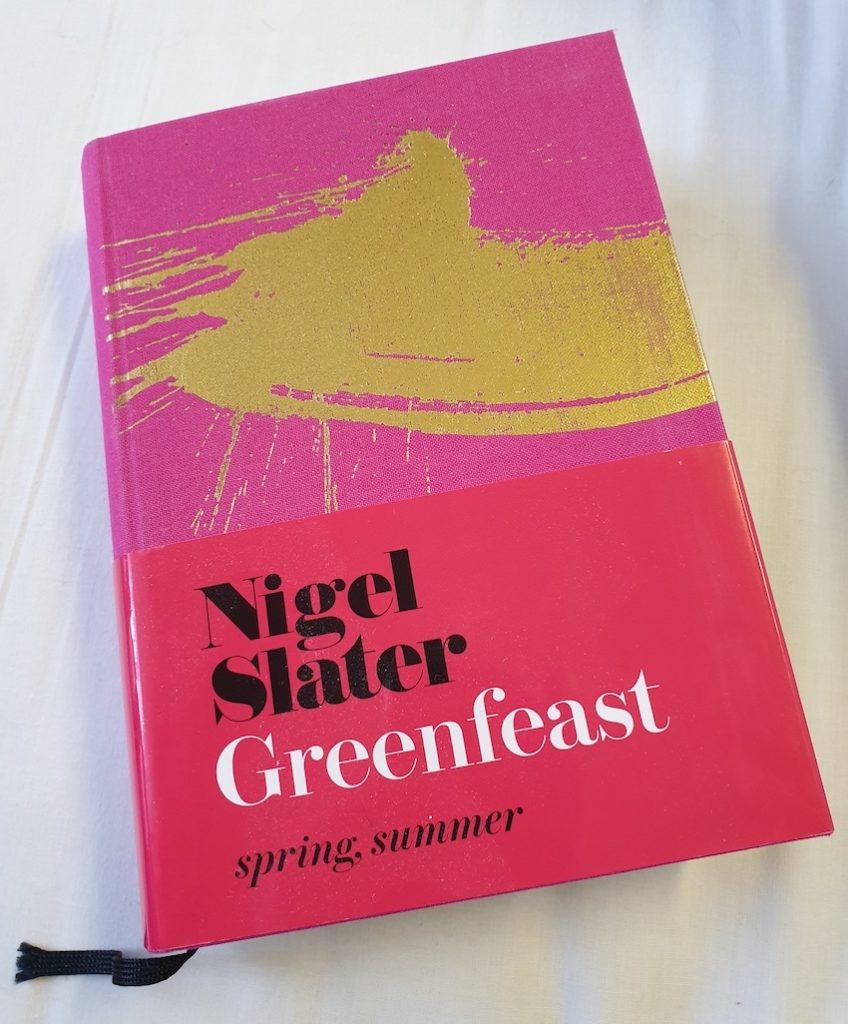 Simply because she writes such excellent reviews and is in command of her subject before she even sits down at her computer. I asked the Doyenne of Food, Wine and Lifestyle writers, and cook book author, Myrna Robins if I could reproduce her review of Greenfeast – here it is.

Let’s start with the design of this hardback, which does not resemble a cookbook at all. Shocking pink cover, featuring a swathe of gold, a single brushstroke by artist and calligrapher Tom Kemp which, he points out, are not pictures or representing anything, but a small aside to remind readers about the” nature of nature… where ultimately the food in this book comes from.”

Glued onto this hard cover is a half-page, glossy red, listing author and title on the front, and a photo and quote from the author on the back.

Unconventional. Intriguing. But as every foodie knows, we can rely on Nigel Slater to produce another title that features his simple prose that is English culinary writing at its relaxed best. Seldom prescriptive yet always thorough, so that beginner cooks are guided unobtrusively to success. (An occasional command “Don’t even think of using horseradish from a jar.”)

Slater tells us that this collection of about 110 recipes is what he eats when he finishes work every day. It’s meant for those like-minded readers who find themselves wanting inspiration for a supper that owes more to plants than animals. In all but name, it’s a vegetarian treasury, that could, with some tweaking, also be suitable for vegans. It’s the way his eating has grown to be over recent years, and we know that across the world, there thousands of others who have followed suit, whether for ethical, health or environmental reasons – or all three. 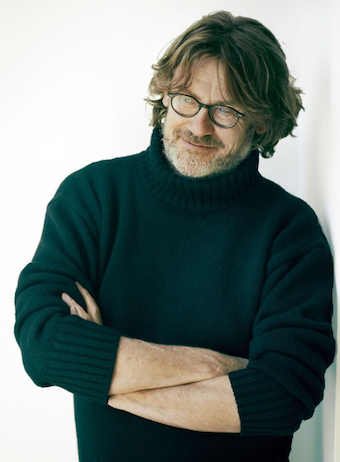 Recipes are grouped into chapters that reflect cooking method or preparation. Thus, ‘In a bowl’, ‘In a pan’, “On the grill’, “On the hob” and so on. Having shared his penchant for eating from a bowl, often using a spoon, Slater offers a variety of recipes best served in a bowl – a simple miso soup containing cauliflower, garlic and root ginger, colourful  paneer with aubergine and cashews, a golden crunch of carrot, pawpaw and radish topped with Asian dressing, . Supper from a pan includes roasted, creamed aubergine, topped with crisp, fried halloumi, finished with pomegranate seeds and mint.

Slater does love aubergine in every guise and also uses a variety of grains from freekeh to couscous or quinoa as a base for many creations. He combines fruit with pulses, with veggies, pickles and herbs – take his plate of green falafel, watermelon and yoghurt, where canned chickpeas, broad beans and green peas are blended with green herbs to a paste, formed into balls, baked until puffed and dry, served with a salsa of cherry tomato, red onion and watermelon and accompanied by garlicky yoghurt. Fans of Asian fare will find recipes of steaming sushi rice topped with nori flakes and crisp pickles of carrot and shallot, topped with tsukemono (pickled vegetables).

But there are other, more familiar combos, such as asparagus baked in an egg custard seasoned with ricotta and parmesan, which resembles a Tuscan classic whose name escapes me right now. An easy tray bake for two consists of new potatoes, red and yellow peppers, simmered with garlic in olive oil, finished with spring onions.

The final chapter is called, simply, Pudding. It focuses on seasonal fruits like blackberries, cherries and currants, Mediterranean stone fruit and figs, mangoes and finishes with watermelon Prosecco. My favourite here is an easy finale of perfect, ripe peaches sharing a plate with mascarpone mixed with double cream and biscuit crumbs garnished with finely grated orange zest. Yum

Recipes are illustrated with full page colour photographs. The index is professional and particularly useful, given the unusual organisation of the recipes. The book’s subtitle “spring summer” gives an indication of the sequel to come, covering autumn and winter.

Myrna Robins at a launch of one of her books