“Eat clean to stay fit, have a burger to stay sane.” – Gigi Hadid

Ask any South African to name their favourite fast food and most will tell you it’s a hamburger! This is the same the world over where everyone loves the simplicity of a patty (be it beef, pork, chicken, lamb, vegetarian or vegan) wedged between two fresh buns, topped with a selection of favourite fillings  – anything from lettuce, tomato, bacon, cheese, onions, pickles etc – and finished off with a preferred sauce such as BBQ, mayo, ketchup, chutney or mustard.

It’s no wonder then that this simple yet delicious and versatile fast food should have its own day – International Hamburger Day, which takes place every year on May 28 – to honour and celebrate it!

While there is much talk about the decline of fast food outlets as people become more health-conscious, burger joints remain the largest segment of the restaurant industry and, in the US alone, the burger market is worth more than $122 billion (R2,2 trillion!).

To celebrate this auspicious food day, here are a few fun facts as well as a mouth-wateringly good recipe courtesy of Chef Sharon Visagie from Capsicum Culinary Studio’s Durban campus.

MacDonald’s has more than 30 000 outlets in more than 120 countries on six continents and sells 75 hamburgers every second.

On average, Americans eat three hamburgers a week, which means a national total of nearly 50 billion burgers per year. If they were arranged in a straight line, it would circle the earth 32 times!

According to the Guinness World Record, the biggest hamburger weighed over 1,164kg and was made in Germany on 9 July, 2017. It consisted of three meat patties, tomatoes, lettuce, cucumbers, onions, hamburger sauce and a bun.

Meanwhile, an 814kg cheeseburger is the world’s largest commercially sold burger and can be ordered from Mallie’s Sports Grill & Bar in Detroit. It consists of a 900kg patty, topped with 135kg of cheese as well as countless tomatoes, onions, pickles and lettuce and a bun that weighs 100kg. The finished burger is a metre high and around 1.5 metres wide and, should you order one, you will need to give them three days’ notice and it will set you back a cool R110 000! 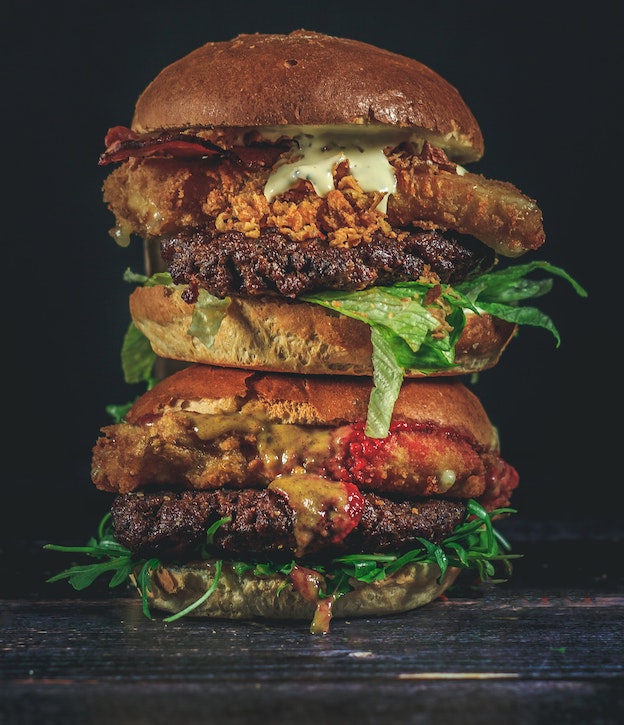 Pre-heat a grill pan on medium heat. When hot, lightly oil the grate.
In a bowl, stir together the jalapenos, red onion, coriander and cream cheese.
Divide the ground beef into 16 portions and pat out each one to 6mm thickness.
Spoon some of the cream cheese mixture onto the centre of 8 of the patties. Top with the remaining patties, pressing the edges together to seal.
Grill for about 7 minutes per side or until done to your liking, taking care not to press down on the burgers as they cook as this will make the cheese ooze out.

Serve on fresh buns with tomato and fresh lettuce.