AN ARMCHAIR SAFARI THROUGH OUR HIDDEN KAROO WITH PATRICIA KRAMER & ALAIN PROUST. A REVIEW BY MYRNA ROBINS…… 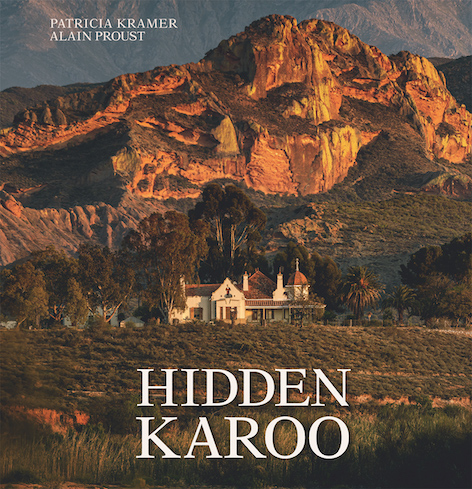 Myrna Robins is one of the most experienced food and wine writers in the Cape. She has written a number of books, judged many competitions and written many book reviews. Living in what is called retirement in McGregor with her husband Vern, Myrna is busy helping to promote the region’s wines and tourism

Of this book, Myrna says…

It’s big, bold and very beautiful. I hesitate to call this heavy hardback a coffee table title as many of those lack meaningful text. Here there is a wealth of information in a series of photo essays that marry the photographer’s brilliant images with the writer’s feast of fact and fable.

Readers are taken on an extensive journey across  the Karoo’s vast plains, flat-topped mountains, through towns and villages which exhibit successive decades of architectural style through churches and hotels, homes and shops. We also glimpse images of the magnificent background that Karoo farms enjoy, with farmsteads carefully sited to take full advantage of nature’s glory.

The first destination is Matjiesfontein off the N1, where the whole village is a renowned private museum and the railway is still used to bring visitors in luxurious trains to this Victorian streetscape. The old railway junction of Touws Rivier sees rolling stock being refurbished in a welcome boost to business, while Beaufort West shows off fine examples of 19th century architecture alongside decaying homes that seem beyond repair.

The magnificent Swartberg is the centrepiece of the next chapter, the mountain  towering  over Prince Albert, an attractive town where gabled homes and flat-roofed Karoo houses are well-restored thanks to an active heritage committee. Willowmore is also visited before we head to ‘Camdeboo to Sneeuberg’, the self-explanatory title of the next chapter.

The beautiful plains of Camdeboo  and the ranges that make up the Sneeuberg form a region better known to palaeontologists than tourists with some exceptions: Nieu Bethesda and its famous Owl House attracts a steady stream of visitors for example. Farms such as Leskraal and Tafelberg Hall boast glorious views as well as fascinating history, others near Middelburg are  visited before readers reach Graaff Reinet with its wealth of notable buildings and striking Gothic church. The town was lucky to have Dr Anton Rupert as a son who was generous in his efforts to preserve much of the town’s architecture. This is followed by  inviting images of the lesser-known Aberdeen which could inspire travellers to include the town on their routes.

The Eastern Karoo  is the next destination, frontier country where “Bantu, Boer and Brit” clashed from early in the 19th century . British settlers in the districts of Port Elizabeth, Bathurst and Grahamstown caused Boers to trek from their farms, where the remains of Bulhoek – possible birthplace of Paul Kruger – is now part of Steynsburg museum. Cradock is home to the restored Olive Schreiner house, while other towns like Somerset East are surrounded by farms with a distinctly British feel.

Colesberg, Hanover and Richmond are celebrated in the Heart of the Karoo, remnants of the Boer war contrasting with homes and clubs that help keep these towns alive.  Best known is  the popular annual Book Festival and literary events that attract travellers to Richmond.

One of the least-known settings, that of the Imperial Yeomanry hospital at Deelfontein was extensively researched by Rose Willis who published a moving record of her work in 2016.  Just over 70km north of Richmond and 46km south of De Aar, the railway siding was chosen for a large British military hospital which was built early in 1900, and, thanks to generous British donations, became the most modern in the country, boasting  radiology, telephones, electricity, sterilisation and specialised units. Its short but fascinating history is marked today by two graveyards and the ruins of a later hotel. One does not need to be particularly sensitive to experience the sadness that emanates from this lonely site.

Heading north and  west to big sky country, readers visit small towns like Williston, Fraserburg, Loxton,   Victoria West and Carnarvon alongside farms where merino sheep dominate agriculture. There are streetscapes of late 19th century buildings, and corbelled buildings survive along the roads between towns.    Today Carnarvon is close to the site of the international SKA, the world’s largest radio telescope. The first phase, the MeerKAT    – – with 64 antennae that can look into deep space – has given the region fame if not fortune.

Further west, this time to the Hantam and Tankwa Karoo, the region thinly populated by small towns like Loerisfontein, Nieuwoudtvillle, Ca lvinia and Sutherland – are renowned for the transformation of the veld into a floral wonderland, while Sutherland also boasts a huge astronomical observatory outside the town. Calvinia yields a mix of 19th century gabled, Victorian art deco and typical Karoo buildings.

And so to the Klein Karoo, spread around both sides of the R62  which meanders to Oudtshoorn through vineyards and orchards, dotted with small towns that start with Montagu and finish with Oudtshoorn. Much of architectural interest to explore fromthe fine ostrich palaces of Oudtshroon to attractive Victorian farmsteads tucked away in the Groenfontein valley near Calitzdorp. Ladismith and Barrydale are both home to stylish buildings but its Montagu that shows off its wealth of varied  architectural style and attractive  accompanying interiors.

The omission of an index is a little surprising, although the colour-coded map of the Cape provinces is a useful record of the regions visited. Hidden Karoo will take its place not only as an essential title in the Hidden series, but as an important title in the field of Africana.

Hidden Karoo Author, Patricia Kramer is a Palaeolithic archaeologist who spends much time and effort in recording South African  historic buildings in danger of collapse or demolition and  this treasury illustrates and  confirms her valuable contribution. Alain Proust whose reputation as one of our finest photographers has long been established uses his talent for composition and understanding of light to enhance the images through 300 pages of beauty.

Myrna Robins at one of her book signings