Muratie Wine Estate is situated on the slopes of The Simonsberg in the Stellenbosch Wine Appellation. The Estate’s first owner was Lourens Campher, a brave soldier who lived in the Soldiers Barracks in Cape Town. He married Ansela van de Caab, a freed slave. Once a month, he would walk from Cape Town to visit her, a walk of over 9 hours. 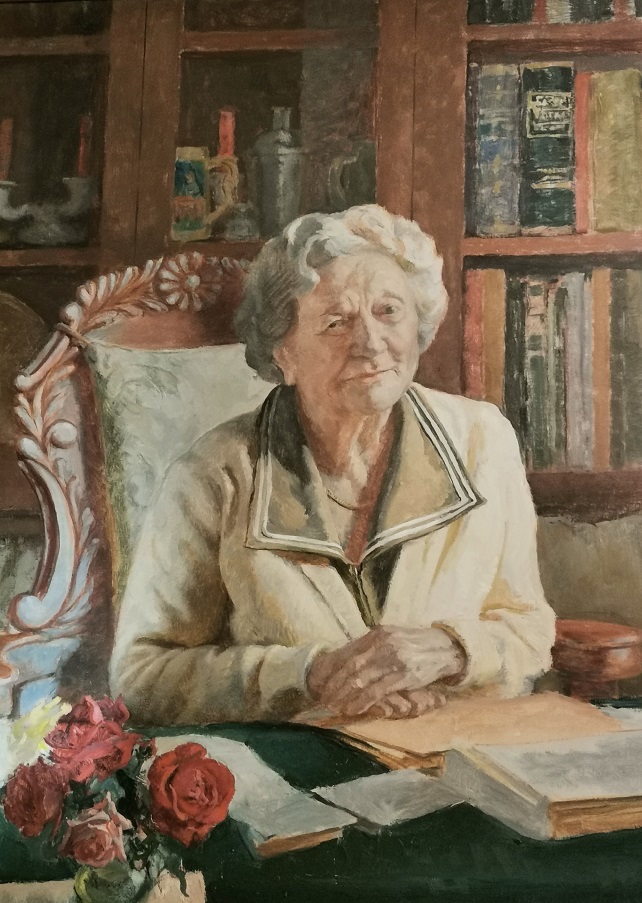 Moving in to modern times, a feisty little lady called Annemie Canitz. I was fortunate to know her well as she was a frequent guest at Lanzerac where I worked in the 60s & 70s. Having shared her father, George Paul Canitz’s devotion to all things Muratie and having lived on the farm for more than 30 years assisting her father, it was Annemie who inherited Muratie when he died in 1958. Strong and independent, she ran the farm competently on her own for almost 30 years with the help of winemaker Ben Prins, the barefoot winemaker, after whom Muratie’s Cape Vintage is named. Fiercely protective of Muratie’s legacy, she honoured the estate with love and passion, keeping everything exactly the way it was in her father’s time – the cellar, the manor house, the art studio he built from bricks made on the farm, and his famous ‘kneipzimmer’ (drinking den) – everything is still very much the same today. 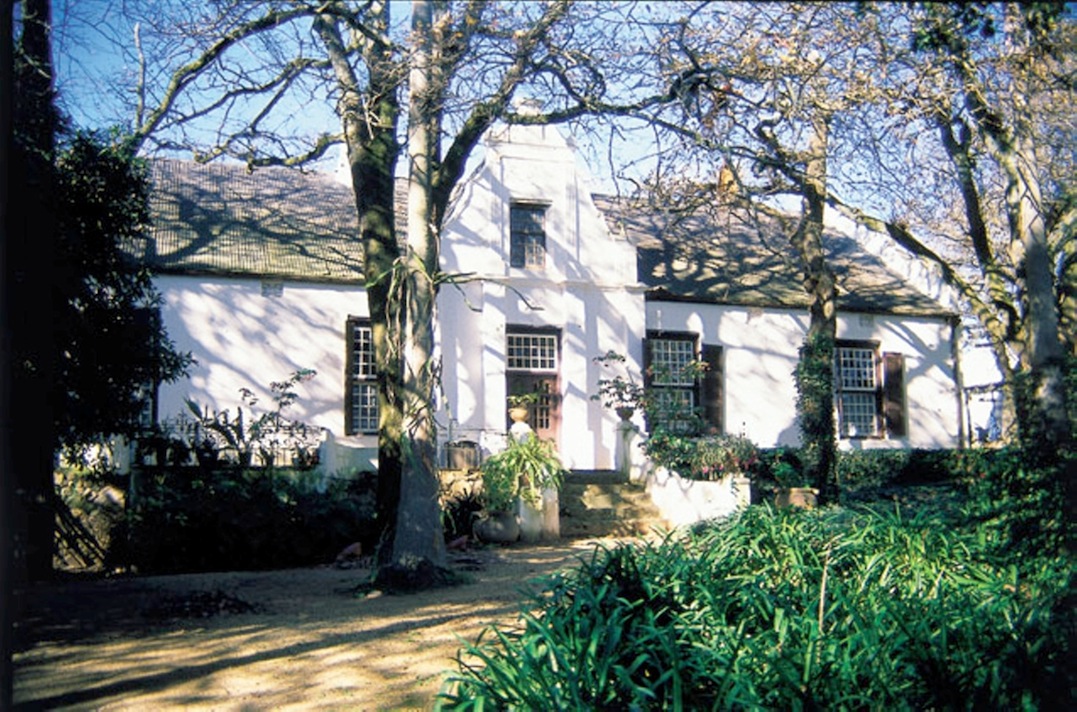 Following in fer father’s footsteps, Annemie continued to make wine and ride her horse well into her 80s, eventually only stopping, she insisted, ‘because the horse is too old.’ At the advanced age of 87 and having no descendants, Annemie was looking for suitable successor, and no one was more perfect than Ronnie Melck. A direct descendant of the legendary Martin Melck (who together with his descendants, owned Muratie for 134 years), Ronnie had nurtured a 30-year-long dream of returning Muratie to the Melck fold. He had first come across the enchanting historic estate and its charismatic owner, George Canitz, as a student buying wine for his ‘koshuis’ dance. 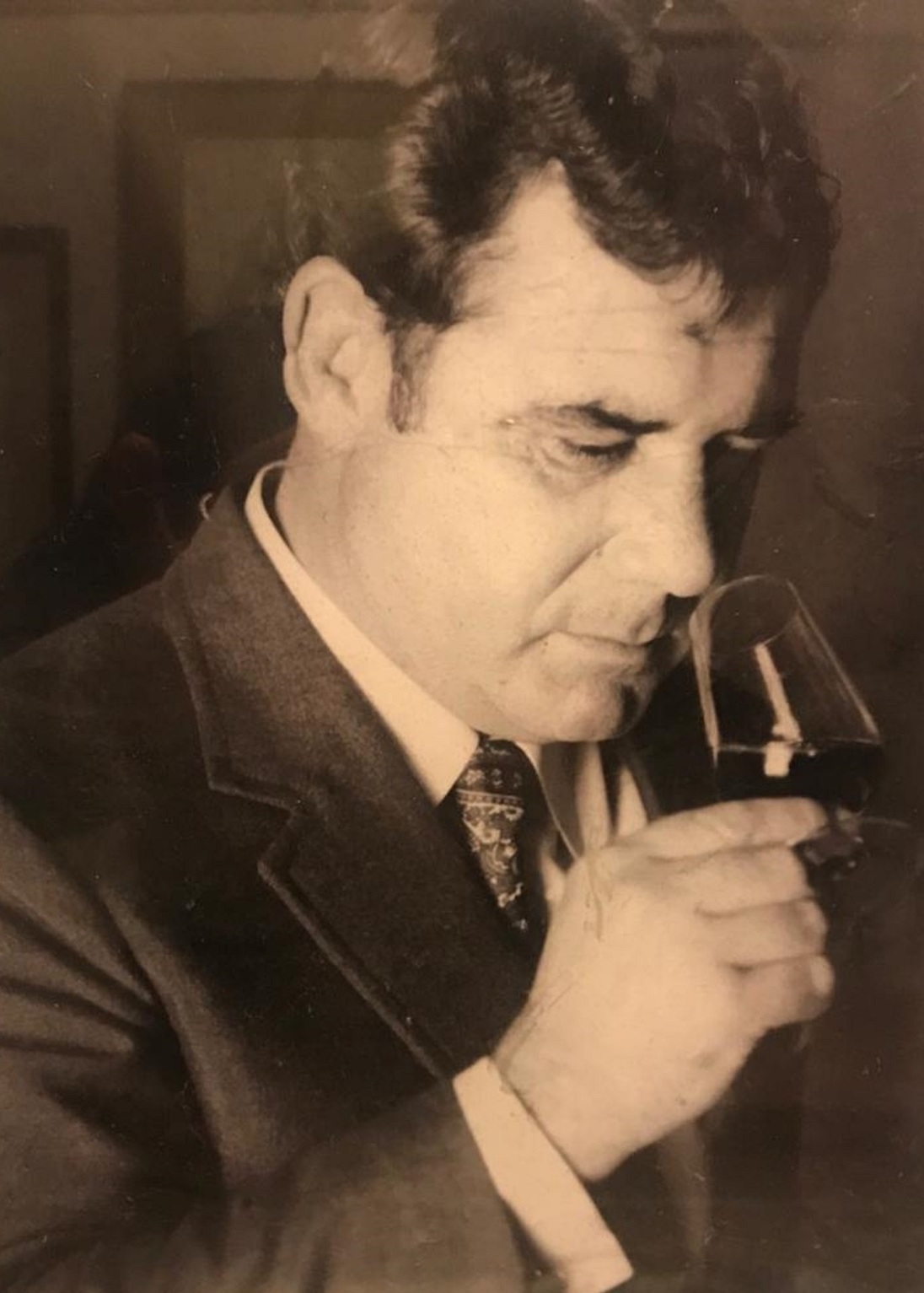 After George’s death, Ronnie visited Annemie on many occasions to procure her much sought-after grapes for Stellenbosch Farmers Winery (the country’s largest wine and spirit company at the time). Annemie was so taken with Ronnie that 37 years later, in 1987, it was Ronnie she phoned to offer him Muratie, knowing her beloved Muratie would be in the right hands. The sale was sealed with a promise that Ronnie would keep Muratie exactly as it was at the time. Thanks to the Melck family’s passionate guardianship, this memorable legacy lives on at Muratie, where time has largely stood still, where the unique old-world ambience is almost tangible. 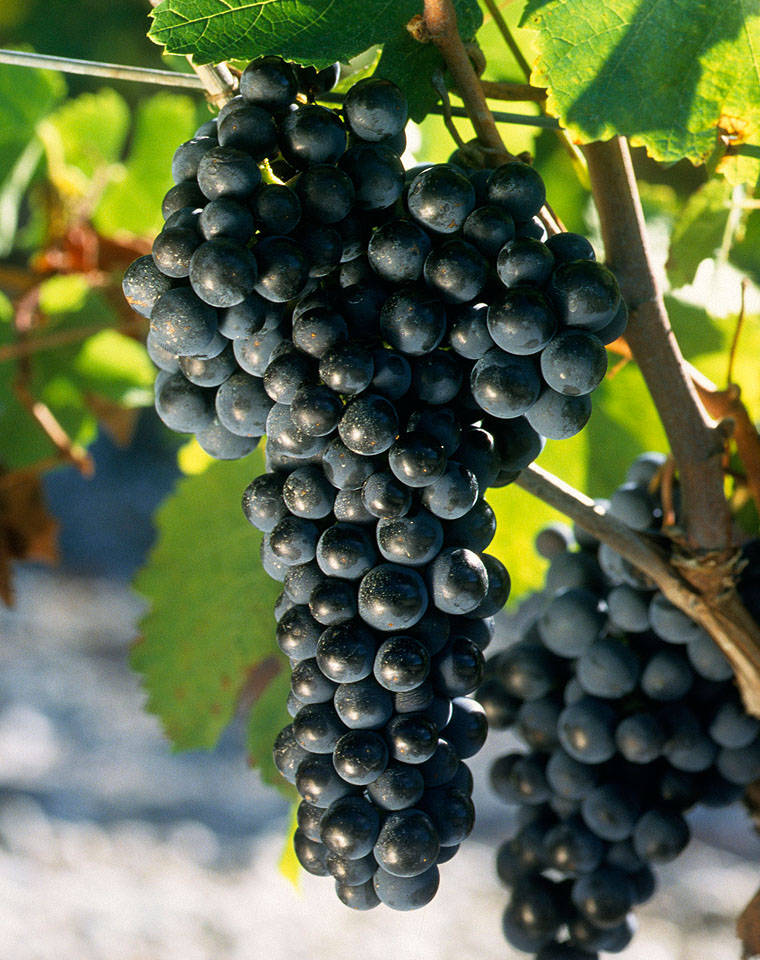 Merlot grapes ripening on the vine 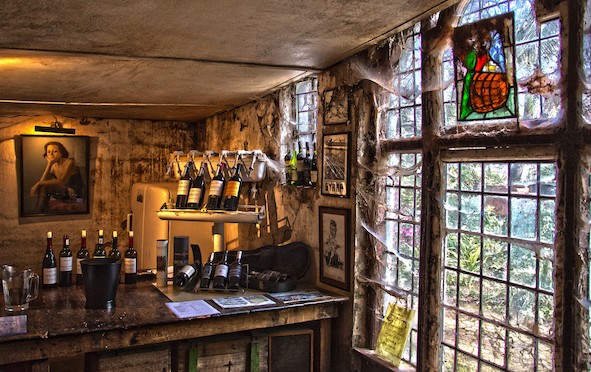 No spiderwebs removed since the Melcks took over

Muratie’s Alberta Annemarie Canitz Merlot 2017 has all the hallmarks of a classic Merlot with ripe plums and earthy notes supported by a core of minerality and fleshed out with luscious dark berry fruit and notes of cocoa, cinnamon, oak spice and toasted hazelnuts. Its full-bodied richness is balanced by fresh acidity and a pinch of mixed herbs. Made in a soft and approachable style for early enjoyment, it nonetheless has enough backbone and plenty of length on the finish to suggest that it won’t disappoint those who wish to cellar it for 5 years. Today the Estate is managed by Ronnie’s son Rijk and his wife, Kim. 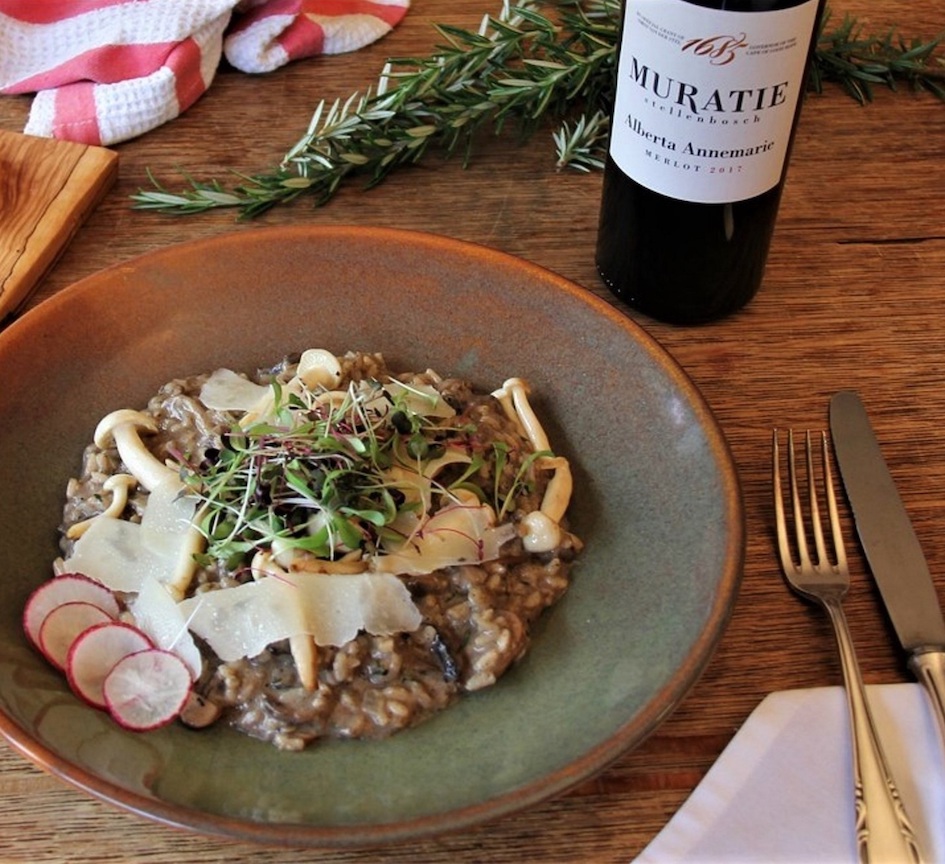 The Muratie Alberta Annemarie Merlot 2017 has a perfect match in Muratie’s Chatelaine, Annatjie Melck, herself something of a hero in Stellenbosch for her contribution to the cultures of food and wine in that well known Wine Appellation. Her Mushroom Risotto is a perfect partner to this wine. 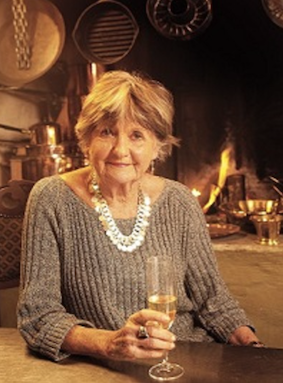 Method
Soak the porcini in 500ml boiling water for 30 minutes. Drain, retaining the liquid. Chop the porcini mushrooms and pass the liquid through a fine sieve. Put the stock in a saucepan, bring to the boil and then maintain at a low simmer.

Heat the olive oil and butter in a Iarge wide heavy-based saucepan. Cook the onion and garlic until softened but not browned.  Add the rice and reduce the heat to 1ow. Season and stir briefly to thoroughly coat the rice. Toss in the fresh mushrooms and nutmeg. Season and cook, stirring, for 1-2 minutes. Add the porcini and their liquid, increase the heat and cook until the liquid has been absorbed.

Stir in a ladleful of stock and cook over moderate heat, stirring continuously. When the stock has been absorbed, stir in another ladleful. Continue like this for about 20 minutes, until all the stock has been added and the rice is al dente. (You may not need to use all the stock, or you may need a little extra.) Remove from the heat and stir in the Parmesan and parsley. Season and serve. 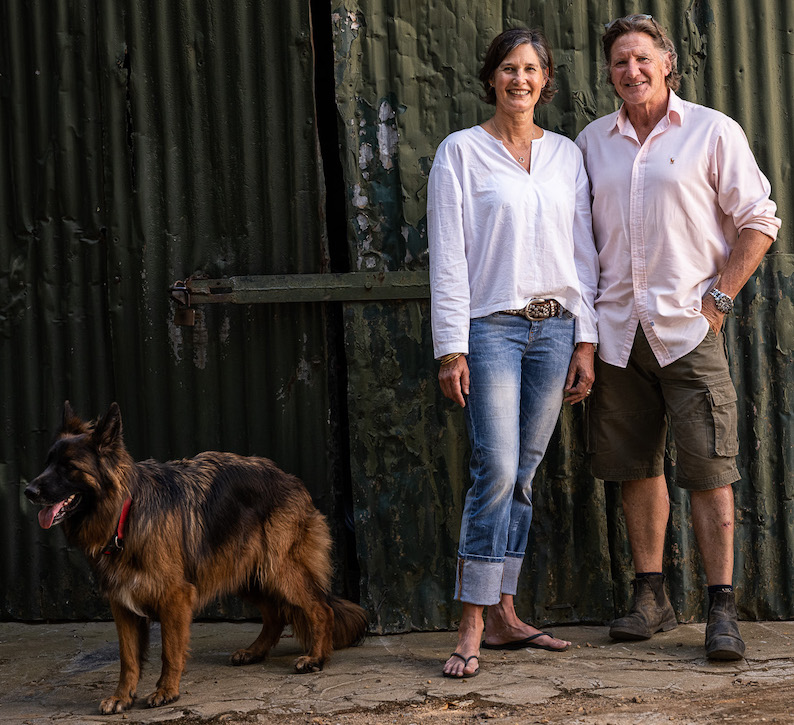 Rijk and Kim Melck with their precious Saartjie