The results of the 2010 Amorim Cork and Wine Magazine Methode Cap Classique Challenge were announced this morning during a brunch at The Restaurant, Waterkloof in Somerset West.  A brunch which carried on well after lunch time with great food and happy noises.

The wines for the competition, now in its ninth year, were judged without the judges having the benefit of seeing the labels.  The panel of five, included two international judges.  They were Hervé Dantan, chef de cave of Champagne Mailly Grand Cru and Nicolas Follet of Oenosense Consulting based in Riems, France. 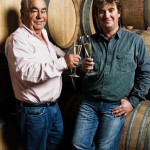 The award for Best Overall went to Bon Courage Jacques Bruére Blanc de Blancs 2007. Bon Courage was also a winner of the Cap Classique Challenge in 2004.

What started out as an experiment by Jacques Bruwer on the family’s Robertson property in 1990 has now become such a success that his Cap Classique is considered the flagship wine of Bon Courage Estate. The success can be attributed to many factors, one of which is the chalky, stone-based soils in the Robertson area, the age of the vines (between 16 and 22 years old) and a luxurious 36 months spent on the lees.