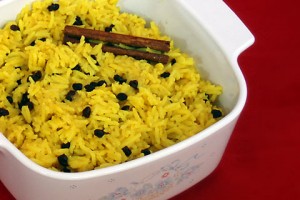 Yellow rice is known as “Begrafnisrys” or Funeral rice in the Cape as it was traditionally served in Cape Malay homes at large family gatherings such as funerals.  Rice was either cooked as “droeërys” [dry rice] or “paprys” [wet rice], though this one, my variation in a type of pilaff, falls somewhere between the two.  While saffron was used in earlier times, turmeric is the current favourite spice used for colouring the rice.  The raisins are optional.

Method: Place the rice in a bowl and pour over a kettle of boiling water.  Stir for a while with a fork and leave to stand for ten minutes.  Pour into a sieve, drain and rinse under cold water.  Pour some boiling water over the raisins to plump them up.  Melt HALF the butter in a heavy saucepan with a tight fitting lid.  Add the onion and the whole garlic clove and let them sweat gently until the onion is transparent.  Add the cinnamon and cardamom pods.  Add the rice to the pan, turning it over several times so that each grain is covered in the hot butter.  Add the turmeric or saffron, two very good pinches of sea salt and some freshly milled black pepper and 600ml cold water.  Bring quickly to the boil, stirring only a little, and reduce the heat to the lowest, cover and cook for 11 minutes.  Remove the rice from the heat.  Stir in the rest of the butter and gently fork through the rice with the raisins and about a teaspoon of sugar or more to taste.  Cover and leave the rice to stand for ten minutes.  Remove the garlic clove before serving.