Charles Withington is a busy Darling Wine Merchant. He has several of his own brands. A brilliant Gin called Darlington – which actually tastes like a fine London Dry Gin. A London Dry Gin does not have to be made in London, it means that there is no added artificial flavouring as the flavours are all natural from the botanicals. In this case Juniper and some Darling florals, Elegant packaging. 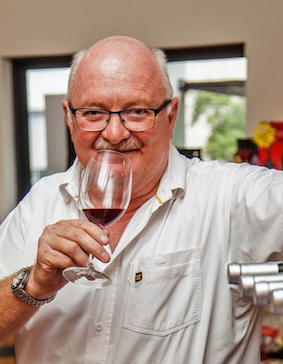 The two wines created by Charles are The Withington Roan Ranger, a play on the word “Rhône”, the name points towards the style of wine – a blend of  Grenache (65%),  Cinsaut and Mourvèdre. So soft  and easy drinking red wine, made from grapes grown in the Darling Appellation. If you land a bottle, serve it lightly chilled.

Charles’s Malbec is a delicious wine. Sadly much in demand in the UK and we don’t really have enough plantings, yet. Charles partnered with Darling Cellars and benefit not only from the expertise of their winemaking team and he believes that together we can get a South African Malbec on to the world stage and give them all a Taste of Darling.

The point of this post is to introduce you to one of Charles Withington’s products, the Withington Voorkamer Brandy – a pot-stilled brandy carefully selected by Charles himself. Beautifully packaged with the label depicting  the Withington family crest. This utterly delicious brandy has a gentle floral nose, with hazelnutty and soft dried fruits on the palate. For a brandy to be worthy of its name, South African Brandy needs to be matured for three years in small casks. The Voorkamer is aged for eight years in French and American Bourbon oak. The Voorkamer [Front Room] was traditionally the room in which guests were entertained. The Voorkamer Festival was quite a feature in Darling, when mini concerts were help in various homes around the town.

To read more about The Darling Wine Shop – CLICK HERE