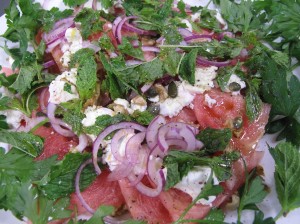 Sonia Cabano, well known TV Cook and food writer, recently called Watermelon The King of Summer.  Growing up on a farm as children, it was the best pudding on a hot  summer’s afternoon, lying in the shade of a huge tree nestled up against one of the twin gables of our farm house, on a leather throw listening to vinyls of some of the greatest singers and orchestras the 1950s and 1960s had to offer.

It was only fairly recently that I realised that this monarch could be made into a fabulous savoury salad.

And the perfect wine to go with it is Christophe Durand’s Vins d’Orrance Kama Chenin Blanc 2010.  Layere os sweet spice, gentle oak flavours from 3rd fill barrels and a long finish.  Made in honor of his wife, Sabrina.