Under the Camelthorn Tree by Kate Nicholls, a review by Myrna Robins… 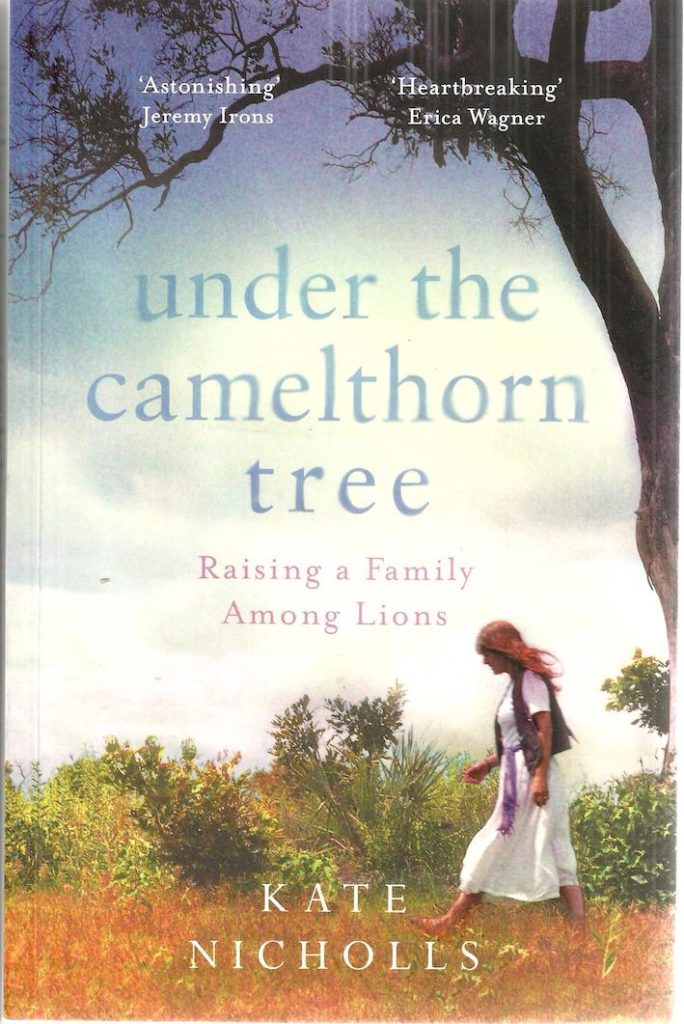 Under the Camelthorn Tree by Kate Nicholls

The author states that this is not an “and I was born” memoir, but rather a series of snapshots of events between 1994 and 2016. Her tale is not assigned to chronological  chapters, but moves from Africa to the UK, jumping a decade or more and back again.

It all adds up to  an extraordinary stretch of Kate’s life, a momentous 22 years during which she brings up her five children in a lion conservation camp in Botswana, is attacked by three men,  descends into a mental hellhole fuelled by whisky, and pulls herself out of it slowly, healing helped by her work of home-schooling Russian children in London.

We meet Kate and her family at the start of the new century at their canvas home near Gomoti river in Botswan. Their camelthorn acacia tree is coming into flower and the older children are helping her partner Pieter fix the antenna back to the radio mast while a car  approaches their camp. It turns out to be two government officials taking the census. With the forms completed, a small tin rectangle with their number is hammered into the trunk of the camelthorn,  which stands sentinel at their home in the Okavango Delta.

Kate had decided to exchange life in a Gloucestershire village for one of adventure in Botswana, bringing with her five children from three different fathers, ranging in age from 15 years to 11 months. That was back in 1994…

Two years on we find her settled, teaching her children in a novel way that saw them absorb knowledge like sponges, taking in principles of subjects like ethology and geology and zoology and more in ways that intrigued them. Kate made education the most exciting pursuit possible. She was also drawn into an organisation called WAR that helped young local women cope with adult and child sexual abuse, rife because of belief that HIV/AIDS could be cured through rape. And she spent time helping her lover Pieter with this lion research project. Just coping with life was a pretty fulltime occupation when elephants helped themselves to the drinking water supply, large animals tried to get into their fridge and lions wandered around close, very close. Large snakes had to be removed from under beds. Insects invade and spiders make  homes where they are not wanted. But she was happy, the children were happy, and she and Pieter loved each other.

Myrna Robins signing one of her books at a launch

In 2003 bliss was harshly shattered when three local men stopped Kate on her way home to a  town house she was renting in Maun, pinned her down and took turns to rape her. She made it to the local police station, summoned a doctor she knew, started her AZT treatment along with a cocktail of antibiotics.  Nicholls’ writing is at its most powerful as she grapples with the anger and fear – that escalated into rage and terror – in the aftermath of the rape, along with grief. Chilled white wine helped, but as a glass became a bottle, a new danger arose.

Not only humans but lions, too, were suffering from feline Aids, and the animals they knew were ailing and dying slowly.

The family, minus Pieter, moved to London and set up home. The teenagers proved that their mother’s homeschooling was of a high quality, as they exchanged tent for classroom, succeeded in finishing school-leaving exams with ease, and found success when applying for the universities they chose. By 2014 they were scattered across the globe – Ireland, USA, Chile and London –  practising an impressive assortment of disciplines.

The chapters recording her experiences before contacting  a professional  organisation for alcoholics are stark, powerful writing with nothing spared. Even  during the darkest  period. bursts of humour and clear evidence of strong family love both serve to counter the trauma.

Nursing her former partner through recovery from a near-fatal car accident is another mind-blowing experience in store for Kate even as her role as mother diminishes – heart breaking but leavened by the love and support of family and friends. As the book ends, Kate has bought a rundown stone house in an Appenine village in Italy as her new home. As she concludes brightly: “Italy is a new adventure. I have no definite plans; something will turn up: it always does…”

Readers are helped keep pace with the frequent transition from Africa to England by a change in  typeface. A gripping story for all who have experienced life under canvas in wild areas of southern Africa, and a compelling read for women, especially for those who inhabit our vast continent.

Under the Camelthorn Tree is published by Jonathan Ball, Jeppestown, 2019