Steenberg – the oldest in Constantia 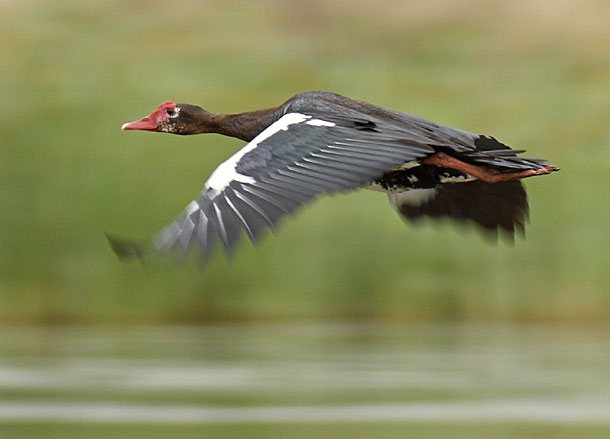 At the dawning of the Cape, the swans rejoined, feeding in paradise
at the foot of the Steenberg Mountains

In her book The Great Houses of Constantia, Philippa Dane, writes that Steenberg “was there even before Simon van der Stel built his great house in the heart of the valley, giving it the name Constantia.”  Steenberg, or Stone Mountain, after the beautiful mountains above the vineyards of this legendary valley, was earlier known as Swaaneweide, the grazing place of the swans.  The swans were no doubt the Spurwinged Goose, which still lives in the valley and can be seen on the estate every day.  Catharina Ustings arrived at the Cape but ten years after Jan van Riebeeck, a widow of 22.  She asked Simon van der Stel for a portion of ground at the foot of the Ou Kaapse Weg and he agreed to lease 25 morgen to her.  She officially took ownership in 1688 when van der Stel occupied Constantia as she was fearful that he would regard it as his, as it had been a gift to her not ratified by law.  She had a life filled with incident and numerous husbands.  The first one died before she arrived at the Cape, the second was eaten by a lion, the third killed ‘by a Hottentot’, the fourth trampled by an elephant and the fifth, one Matthys Michelse, seems to have lasted the course.

View over the vineyards

From its earliest days, Steenberg was known as a place of great hospitality.  Baron van Rheede tot Drakenstein, Commissioner of the Dutch East India Company pulled in there for lunch one day with his party and partook of an extremely healthy meal ‘with radishes, and freshly baked bread and cabbages.’  Doubtless they had a glass of wine or two.  Steenberg today offers excellent hospitality with great wines and two restaurants, Catharina’s with Garth Almazan as its Executive Chef and the Bistro 1682 with Kerry Kilpin creating the food magic, and an excellent hotel transformed out of the old Manor House and its out buildings for overnighting.  All this within a 20-minute drive from the centre of Cape Town.

The staff in the luxurious spa offer guests the perfect treatment to suit their particular needs.  A championship 18-hole Peter Matkovich-designed golf course on the Estate, makes full use of the natural features and hazards surrounding the hotel.   Many have invested in a beautiful home on the Steenberg Estate. 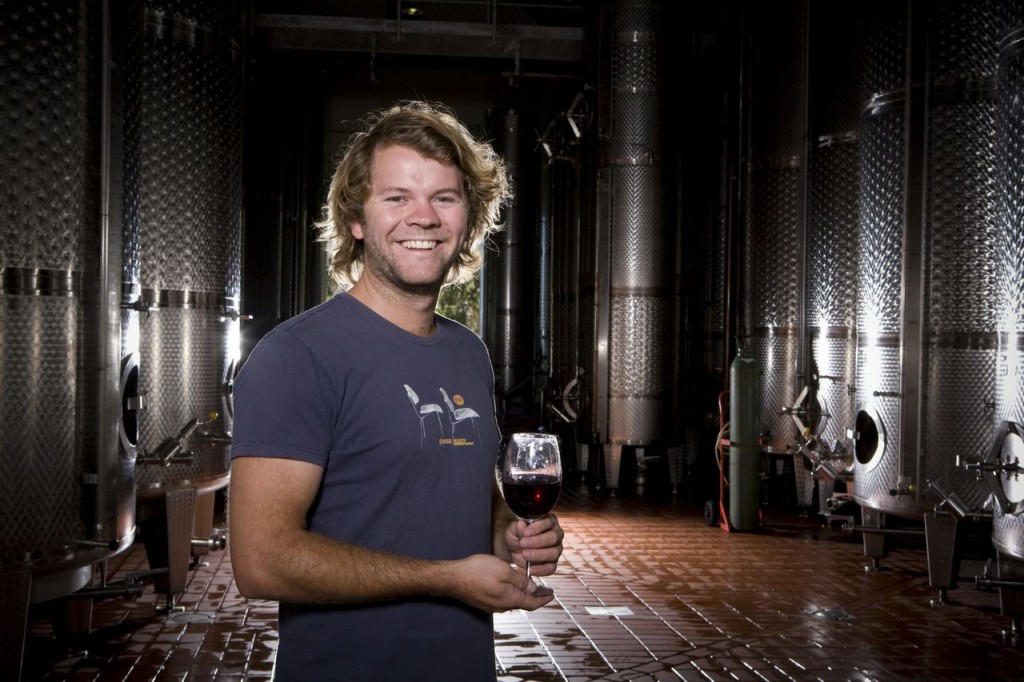 Steenberg holds the distinction of being the oldest farm in the picturesque Constantia Valley, which is generally considered to be the cradle of South Africa’s Wine Industry and one of its premier wine growing regions.  With its cool, sea-facing slopes and majestic granite ridges, this vineyard has developed a worldwide reputation for producing excellent Cape wines from its state of the art modern winery, emulating the golden age of Constantia wine in the 18th century.  Winemaker JD Pretorius and his team producing some of the country’s finest award winning wines from a variety of wine grapes. 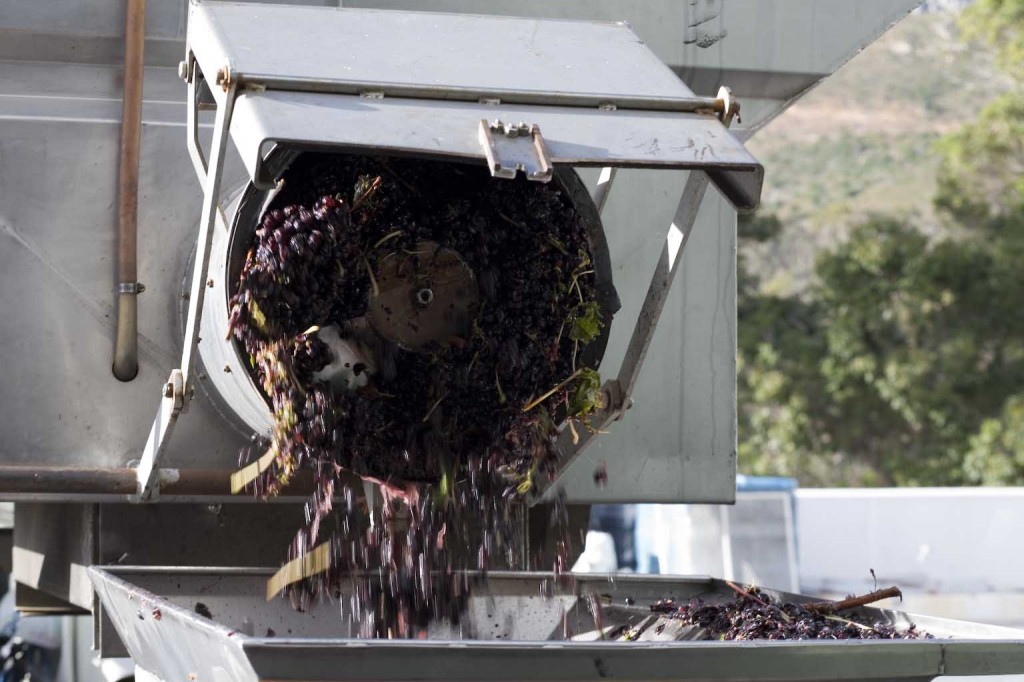 Merlot arriving at the Cellar

The Steenberg vineyards, winery and wines
Since purchase from the Louw family in 1990 and then later by Graham Beck  Wines in 2005, Steenberg has undergone extensive soil and micro-climatic analyses before a complete replanting programme was begun and then added to in subsequent years.  Currently there are approximately 62ha under vine of which 60% is white: Sauvignon Blanc (50% of total plantings) Chardonnnay and Semillon.  The red varieties are Merlot, Cabernet Franc and Shiraz. The farm is also one of only a handful in the Cape to have invested in the red Italian variety Nebbiolo. 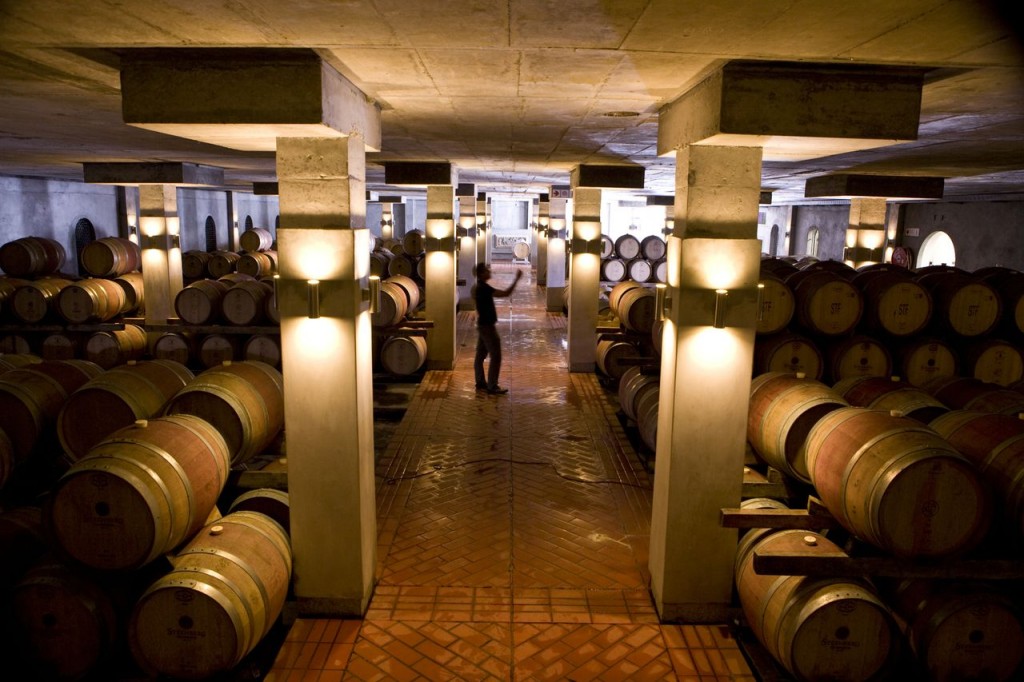 There are a number of unique Steenberg attributes.  It macro-climate which is mild temperatures, cooling breezes from the nearby False Bay, an excellent rainfall in winter and soil aspects which allow for good exposure to sunlight.  Meso-climatic conditions are the southern-eastern slopes, and the rise in altitude from 60m to 160m above sea level.  The proximity to Atlantic Ocean and False Bay, both important factors.  The micro-climatic conditions display moderate plant growth, excellent canopy management by the viticultural team and soils types ranging from low vigour to high potential types. 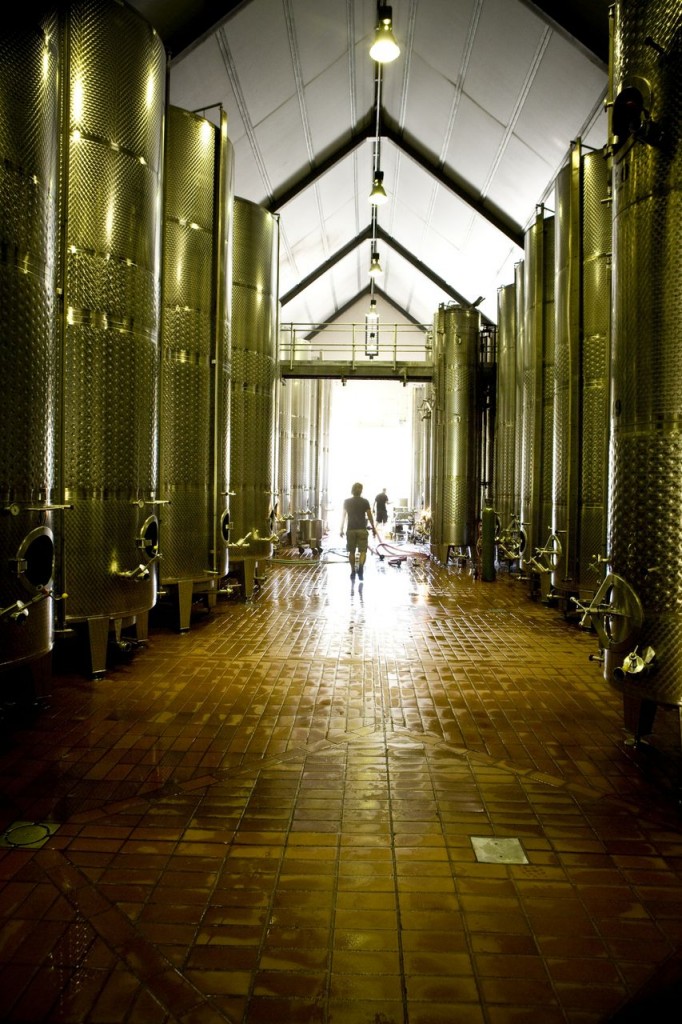 The Winery
While it is accepted that the most important ingredient for a premium wine is the quality of grapes from the vineyards produced by farm manager, Johann de Swardt and his staff, it is also the passion in the cellar and the gentle human intervention of people like General Manager John Loubser and latterly winemaker JD Pretorius which leaves its mark on the wines of Steenberg.  John using the most modern of cellars, his breadth of knowledge about and love for wine carrying forward the spirit of the widow Catharina Ras into the 21st century.  As John so succinctly and expressively puts it, “I’m influenced by what surrounds me. Smells, flavours, colours, vistas, sounds, experiences, people – anything that tickles my imagination or my senses. The thought of a good wine and food combination makes my mouth salivate. Wine is truly one of the highs when it comes to sensory pleasures and this influences me.”  JD Pretorius, now and old Steenberg staffer was appointed as wine maker at Steenberg Vineyards in June 2009.  He embodies totally the spirit of the new generation of winemakers, and with his fresh approach and infectious enthusiasm, makes a great contribution to the quality of the produce from Steenberg’s Cellar.

The icon wines of Steenberg Vineyards are Magna Carta, a white Bordeaux style blend, Sauvignon Blanc, and Semillon.  Other wines carrying the Steenberg label are, Shiraz, Merlot, Nebbiolo and 1682 Chardonnay MCC.  There are more. 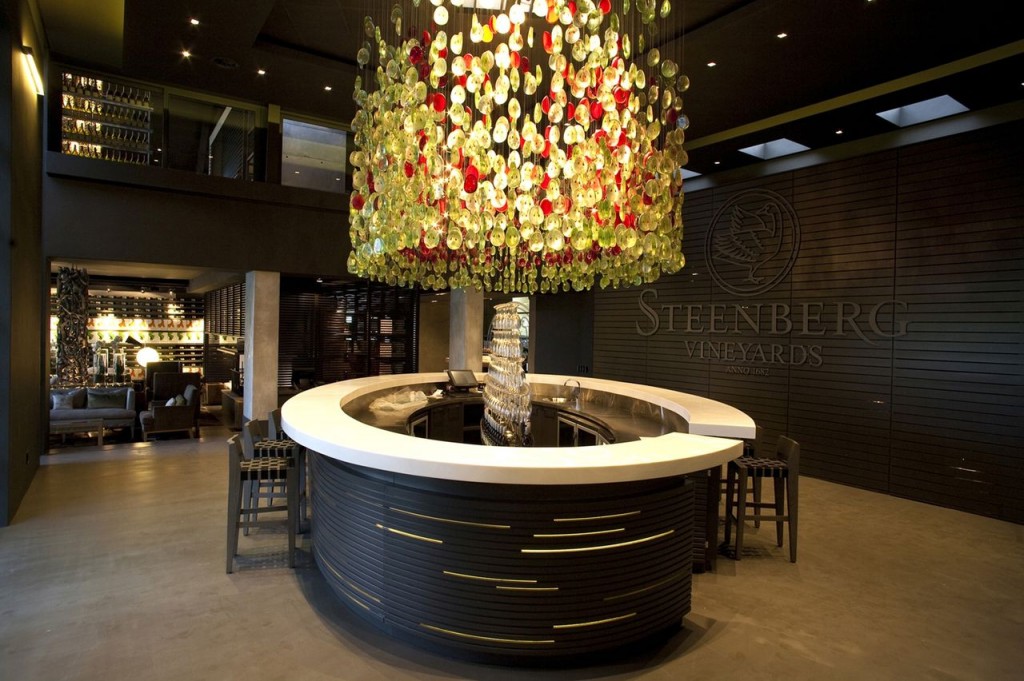 The Wine Tasting
Steenberg has an attractive Tasting Bar over which hangs a huge chandelier installation made of glass and representing slices of red and white grapes with pips in position.  The tasting room is open from Mondays to Sundays (including Public Holidays) from 10h00 to 18h00.  There area  number of tasting options available – click here for more information.

Winemaking and an aerial view of the cellar can be seen from the tasting bar and a guided 10 to 15 cellar tour offers a more interactive experience through the Winery and Maturation Cellar to see how grapes are turned into the legendary Steenberg wines.  These tours take place from Monday to Friday at 11h00 an 15h00.

The Restaurants on Steenberg 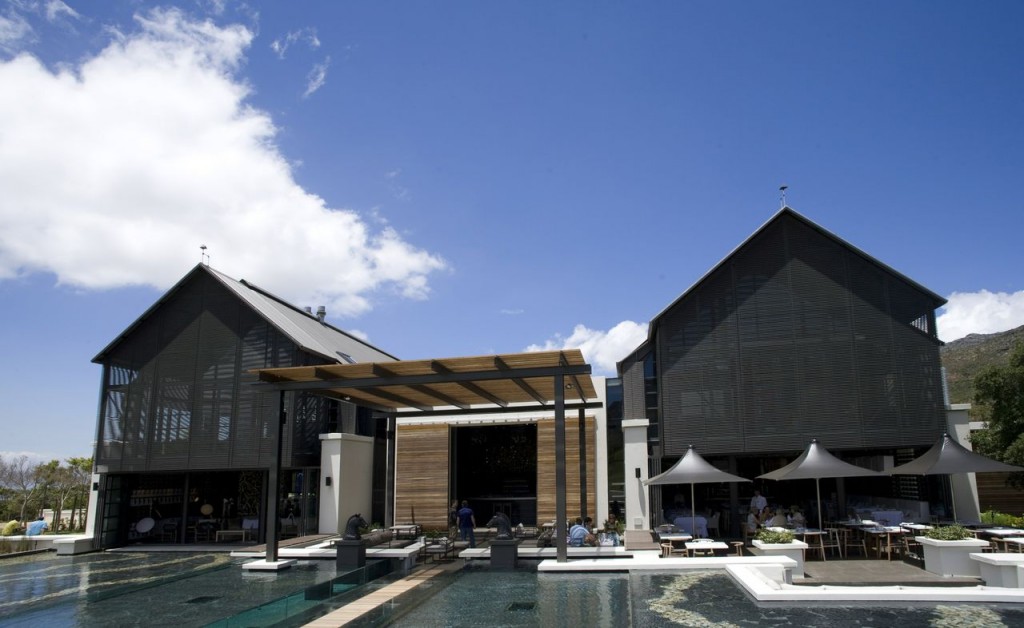 Bistro Sixteen82 at The Steenberg Winery

Bistro Sixteen82
Bistro Sixteen82 opened its door in 2009, the very capable and experienced Kerry Kilpin has been manning the pots since late 2014. The Bistro is a modern daytime restaurant which is a unique and delicious food experience – and so close to the centre of the city. 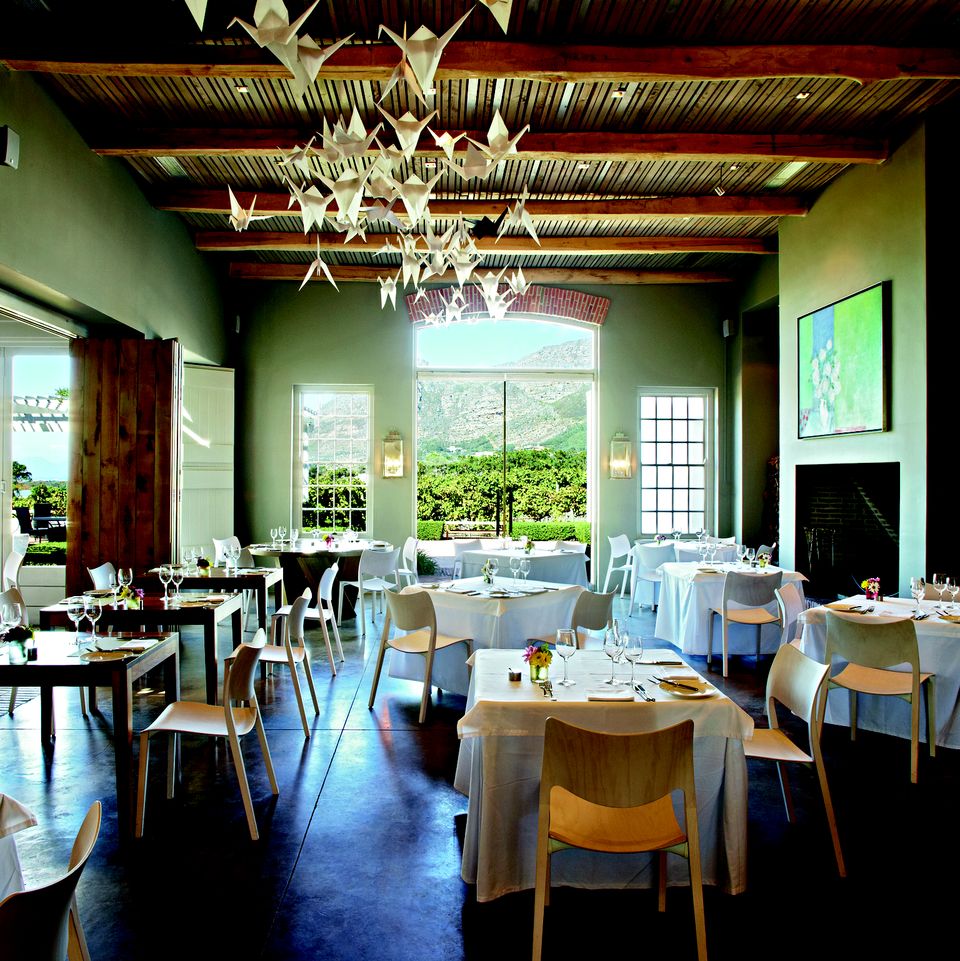 And so different to Catharina’s, whose kitchens are ruled over by Executive Chef, Archie Maclean.

The Steenberg Hotel
This fine establishment offers all the luxuries of a fine 5 star city hotel, yet it is in the country, surrounded by vineyards and a rolling green golf course.

I have stayed in the magnificent Cape Dutch Suite at the hotel, and what a treat it was.

Steenberg
is a
Winery Partner