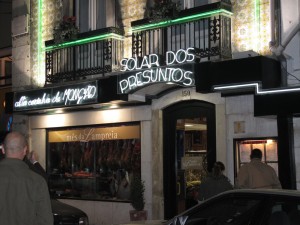 “Oh – it’s the best restaurant in Portugal you know” was the comment I heard when people asked where I had eaten.  When I said I had been twice in the space of two weeks, a look of reverence came over their faces.

Solar dos Presuntos [presunto is the word the Portuguese use to describe the fabulous hams they make from the black footed pig] specialises in, well ham, and cheese and fish and lobsters and in season, which they are from January to April, the Lamprey.  Had I not been hosted both times, I would have chosen to taste lamprey as it is clearly a delicacy.  And I had gone to Portugal the first time on 2008 with the decision to eat everything put in front of me.  Goose barnacles almost tested me!

The restaurant is owned by the Cardoso family and has been operating since 1974.  It stretches over two floors, with the top floor a warren of little rooms, walls covered with framed photographs of famous guests.

Evanisto, the father Cardoso, awaits you at the door, all old world charm, dignity and grace.  He finds an English-speaking waiter to take us to our table.  As we climb the stairs through a window on the left we see a funicular carriage on the steep street outside waiting its next load of passengers.  On the right mother Grace is chasing up a bevy of ladies in the kitchen at work over steaming pots and pans.

Upstairs we are met by son Pedro, fish in hand.  He is running the three upstairs dining rooms. 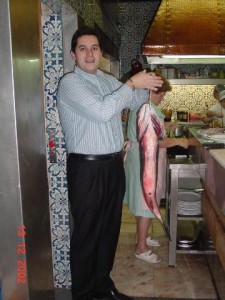 And so it begins – even though you are in a restaurant, you feel as though you are in their private home.  Our first meal is as guests of Sonia Fernandes of ViniPortugal, the body which oversees the promotion and marketing of Portuguese wines overseas. I am travelling with Neil Pendock, Sunday Times Wine Writer, voted Most trusted palate in South Africa, his partner South African artist Luan Nel and Anîbal Coutinho, well known Portuguese wine writer, and the man responsible for our visiting Portugal.

Next posting is a series of photos and note book entries of this wondrous experience.