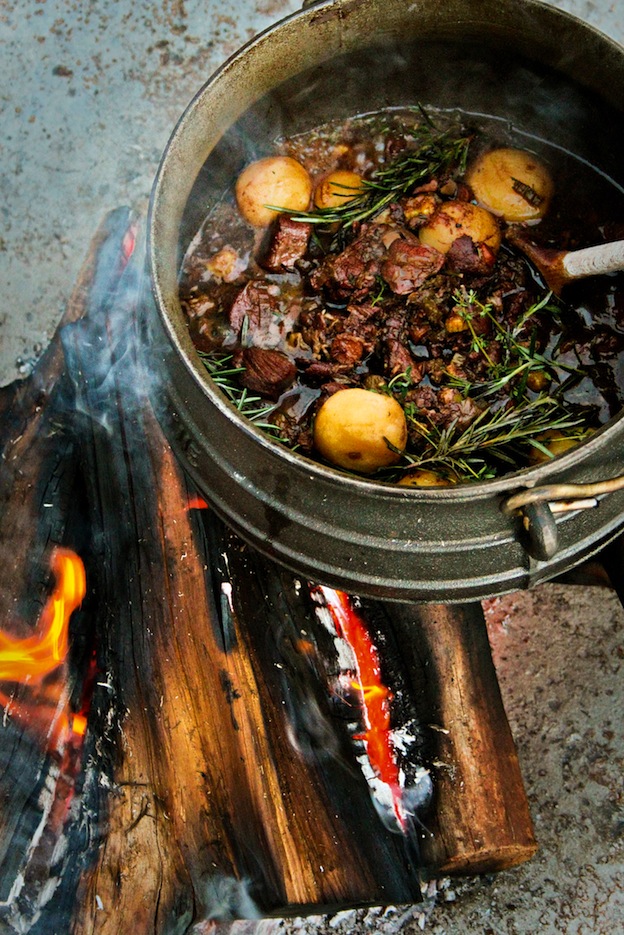 Potjiekos literally translated means ‘small pot food’ and is a traditional South African stew prepared outdoors. It is usually cooked in a round three-legged pot over a wood fire. This is an all-in-one dish served straight from the pot with some rice or even fresh bread to soak up the delicious rich sauce. I’ve used warthog for this recipe, but any venison or even beef will do. Dukka is an Egyptian spice mixture, delicious in stews or on its own mixed with olive oil as a dip.

Make the dukka spice ahead of time. In a small blender, grind the hazelnuts, pistachios, sesame seeds, coriander, cumin, fennel, pepper and salt together, then store in a sealed jar.

Prepare a small wood fire and clean out a No. 3 size potjie.

Heat the oil in the potjie and fry 4 tablespoons of the dukka spice. Add the carrots, onions, leeks, celery and garlic, and sauté for about 10 minutes. Stir in the thyme, rosemary, cumin, coriander and star anise.

Add the meat and chorizo and brown the meat. Deglaze the pot with the port, stock and honey. Simmer, covered, for 2 hours. Add the potatoes and apricots, then simmer for a further 30 minutes, adding more cooking liquid if needed. The meat will be very tender and starting to fall apart. Serve hot with askoek, or crunchy bread. 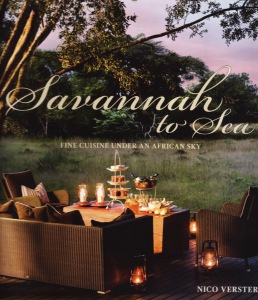 There is a good reason why the strapline of this book reads ‘Fine cuisine under an African sky’ as Nico Verster has spent a decade plying his trade as a professional chef in some of the most breath-taking locations South Africa has to offer. Three of these are at the heart of Savannah to Sea, viz. Jamala Madikwe, a safari lodge in North West Province, andBeyond’s Phinda forest and vlei lodges in KwaZulu-Natal, and Birkenhead House boutique hotel in Hermanus in the Cape.The book is divided into four chapters that encompass starters and snacks (Leadwood and aloes); main courses with white and red meat, fish and seafood, and game (Springbok and coral); baked delights (Monkey orange and baguette); and desserts and sweet treats (Marula and acacias). All 55 recipes feature Nico’s culinary signature of elegance combined with pan-African cuisine ‘twists’, whether in the ingredients or the techniques, and range from classic favourites to the ultra-trendy.Adding to the authenticity of the African experience, as well as the charm of Savannah to Sea, are some often-humorous tales from his time in these varying and challenging environments. And because Nico is so utterly passionate about his subject, he took the photographs himself, both food and wildlife.