Simple Pantry Beef Casserole, made with ingredients from the pantry & fridge… 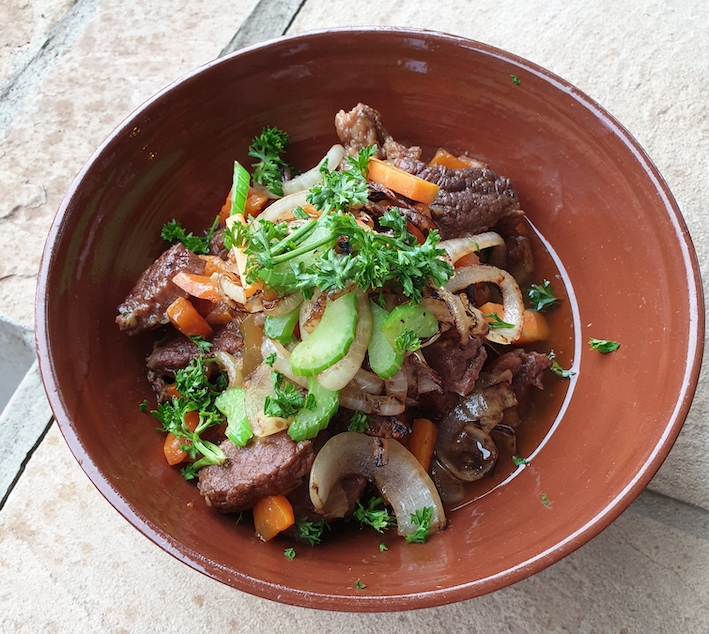 Recently I was asked to make a beef casserole for supper. I was presented with two kilos of thick sliced beef brisket which had a small amount of bone, which I removed and then later used in the casserole to add flavour to the dish. We had the necessaries, to which I could have added tomato and red wine, though I chose not to, to accentuate the flavours of the beef and to follow the AIP Protocol Diet. At the end I offer advice for further flavourings.

What you’ll need for your Simple Pantry Beef Casserole

Set the shelf in the centre of the oven, and raise the heat to 160C. Cut the beef off the bone and cut it into squares the size of a matchbox. Cover the bottom of a large ovenproof casserole with a thin layer of your oil of choice. Add the onions, salt them gently, and over medium heat stir fry them until they start turning a golden brown. Add the garlic, stir fry for a couple of minutes then add the carrot and celery. Cook for a couple of minutes just to soften and colour the vegetables.

Now you have a choice, you can either brown the beef cubes in the casserole before you do the vegetables. I chose not to and added the meat to the vegetables and turned them through for a while. We had a cook who used to make all her stews this way.

Add salt to taste and the beef broth. I then placed the bones on top, covered it with a cartouche of kitchen paper, then the lid and put it in the oven. I left it there for three hours. I removed the paper, the bones and gave the casserole another 30 minutes on top over low heat. I then raised the heat and reduced the sauce.  Taste and reseason.

This dish follows the AIP protocol up to this stage.

Now, if you like you can add some freshly ground black pepper, a tablespoon or two of Dijon mustard and a couple of tots of a Port style wine.

Put in a dish, top with the garnish and serve, with the bones separately.

Good with a salad and some crusty bread.