Simonsig Wine Estate with a view of the Simonsberg

Regular attendees of wine events will have experienced an inspired wine maker or marketer stating that “wine is made in the vineyard”. Which is, with respect, becoming a bit of a cliché.

The role of the human hand in making wine can never be underestimated. As Duimpie Bayly, a true South African wine legend and former head of production for Stellenbosch Farmers Winery says: “Wine might be made in the vineyard, but I’ve never seen a horse winning the Durban July without a jockey.

I was reminded of Duimpie’s words when celebrating the 50th anniversary of Simonsig Estate’s wine brand with the second and third generation of the Malan family, who currently own and manage this Stellenbosch property. Between the conviviality and the buckets of good wine, various speakers recounted Simonsig’s history, one which includes many firsts in the South African wine industry. It was evident that the history of Simonsig is inextricably linked to a man known as one of the sharpest jockeys the local wine industry has ever known, namely Frans Malan, the estate’s former owner who was responsible for getting the first Simonsig wines onto the market in 1968.

Simonsig Chenin Blanc, one of the first bottled Estate Wines

Whilst listening to the regaling of tales from years yonder, one was also reminded of the pitiful lack of records outlining the pioneering roles people such as Malan, Bayly, Danie de Wet, Sydney Back, Spatz Sperling and Tim Hamilton Russell have played in the industry over the past fifty years. These are real icons; whose stories need to be told and their influence noted.

I was privileged to meet Oom Frans Malan while studying at the University of Stellenbosch in 1987. My journalism class professor, Johannes Grosskopf, endeared himself to us one summer afternoon by loading the class into a minibus and hot-footing it to a wine farm. The destination was Simonsig and we were welcomed by none other than the patriarch himself. His sons Francois and Johan were then already working on the farm as viticulturist and wine maker respectively, giving dad Frans the opportunity to lead a bunch of kids through a tasting of his wines.

Frans and Liza Malan of Simonsig
Pioneers in Wine, Founder of The Stellenbosch Wine Route
Made the first MCC in South Africa

For a fourth year student, being placed behind a row of half-full wine glasses without having to pay for any of it made the visit a roaring success from the start. But when Oom Frans began speaking it became clear that this was more than an irreverent and forgettable mid-week jollification.

I’ll never forget how he talked about wine, the respect thereof and culture. Not a word on malolactic fermentation, new oak or flavours of berries and cherry blossom. While we tried to swirl and sniff like pseudo experts, Oom Frans said that just like classical music (on which he was very knowledgeable) and art, wine was an integral aspect of civilisation, history and culture. And that therefore wine had to be approached with the same degree of respect, and that this was something he does every day when picking up a wine glass. 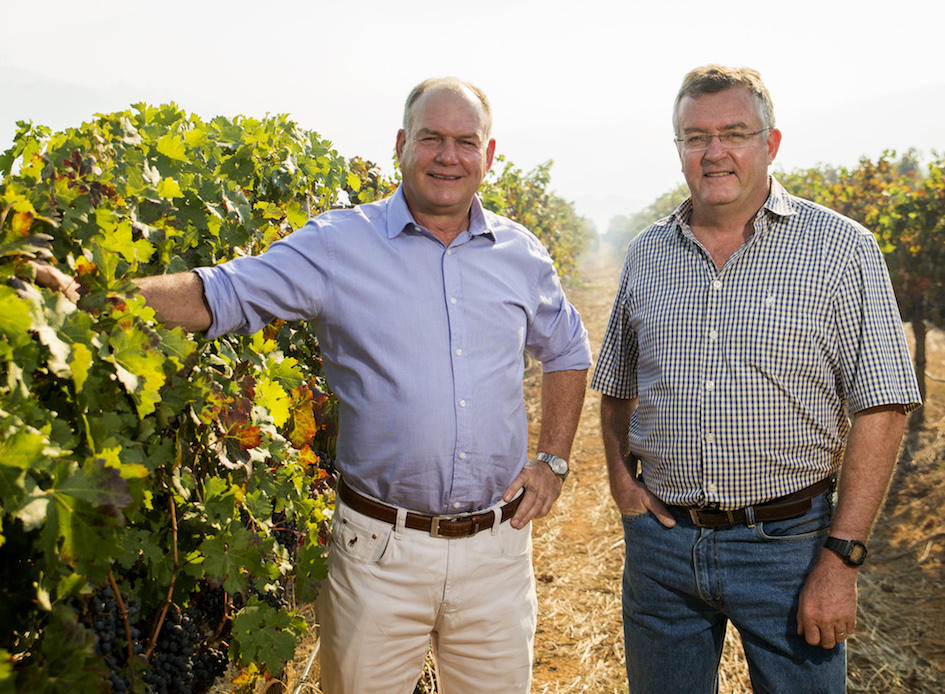 Francois & Johan Malan, Frans & Lisa’s  sons who now own and manage the Estate

Personally, I was so moved by Oom Frans’s homage to wine and culture that I almost forgot to down my last glass of Kaapse Vonkel.

Some thirty years later it is clear to me that Oom Frans not only left a deep set of footprints in the South African wine industry, but also a set that are indelible.

By bottling its own wine in 1968, Simonsig became only the sixth Stellenbosch wine farm to break out of the shackles locked onto farmers those days by the big corporates such as KWV, Stellenbosch Farmers Winery and Distillers. He spawned a new movement that brought the unique character of South African estate wines to the local and international market-place, causing many other independent wineries to do the same. 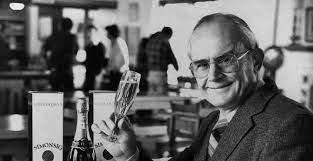 Today it is a well-publicised fact that wine tourism is one of the industry’s more captivating success stories. This began in 1971 when Oom Frans, fresh from a visit to the winelands of Germany and France, convinced his fellow wine farmers Niel Joubert from Spier and Spatz Sperling to help him start a wine route. The Stellenbosch Wine Route was thus formed, the country’s first, leading to the beginning of a surge in tourism-related activities throughout the Cape winelands, and today we are seen as leaders in this field.

It must, however, not be forgotten that Oom Frans was a master of his craft. With an MSc degree in oenology he was not afraid to be as pioneering in the cellar as he was in the field of wine politics and marketing.

In 1971 Simonsig released South Africa’s maiden bottle-fermented sparkling wine, launching the Méthode Cap Classique category which today is one of the most popular local wine segments – critically as well as commercially.

Oak maturation in small barrels might be general practice today, but with the 1972 harvest Simonsig became one of the first South African producers to use barriques for ageing red wine. In 1978 Simonsig made the country’s first wooded white, leading to the then-popular category of Blanc Fumé.

The Malans were a formidable part of the Chardonnay movement that swept through the country in the 1980s. And when it came to marketing, Oom Frans ruled with his wits: he never arrived at guests or at a restaurant without a bottle of Simonsig wine in his hands, and firmly believed that a wine maker has to do his or her own marketing, deploying copious amounts of boot leather in the process.

As Chairman of the erstwhile Rural Foundation, Oom Frans played a leading role in improving the lives of the Cape’s farm worker communities on socio-economic and health levels, as well as promoting the importance of fair labour practices among his peers. 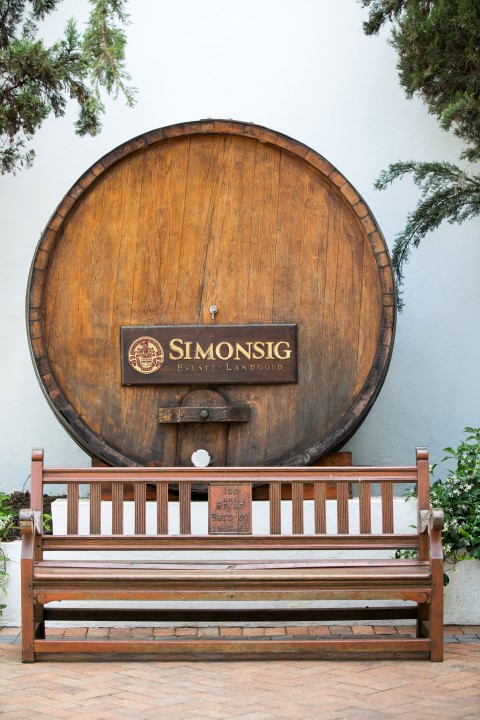 Oom Frans passed away in 2003, one day after his 75th birthday. But the current 50th commemorative celebrations at Simonsig rightfully alerts one to the important role leaders and pioneers such as he played. Long may their legacies live.

Wine farmers of the ilk of Oom Frans are, after-all, also made in the vineyard. 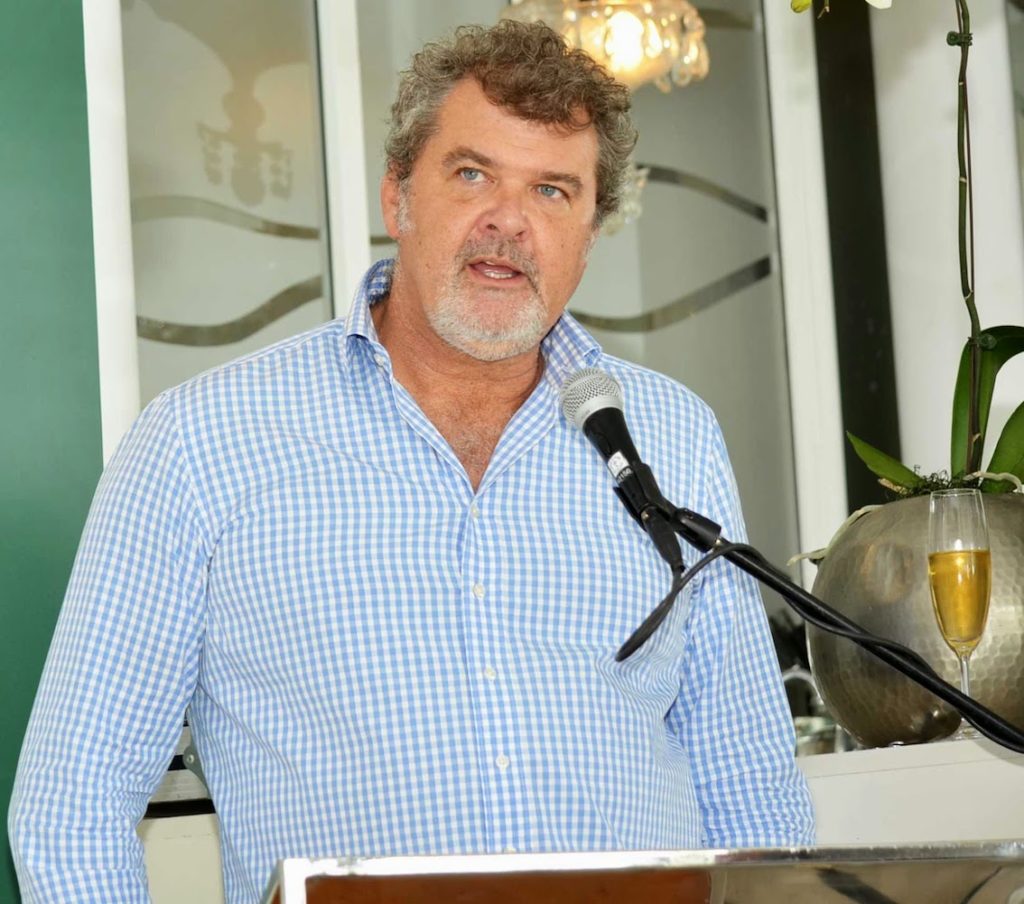 Reproduced with kind permission from Emile Joubert.  A respected journalist and wine writer, Emile runs his own Public Relations Consultancy in Stellenbosch, Media Vision which has a number of top notch clients.