PALACES OF STONE by Mike Main and Tom Huffman, a review by Myrna Robins… 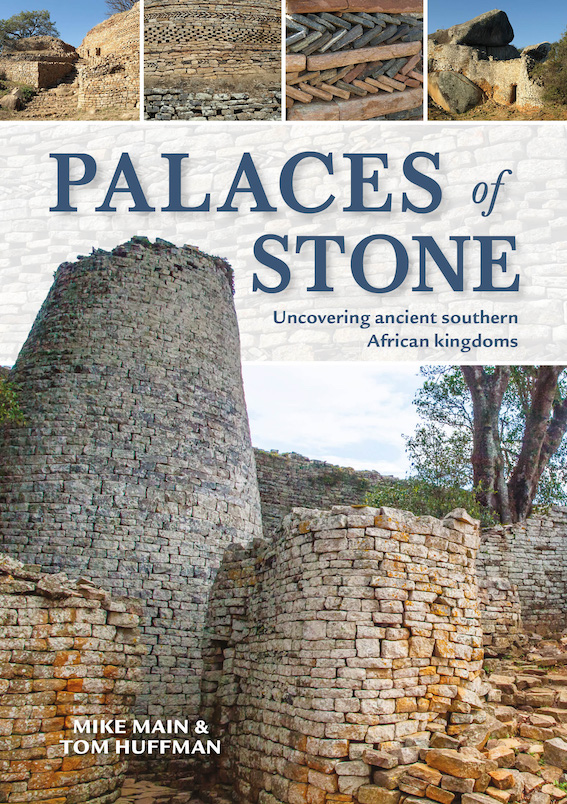 Palaces of Stone by Mike Main and Tom Huffman

Another erudite book review by Myrna Robins, doyenne of Journalism in the Cape. Food, Wine are her major interests with any number of Food Books published.

“Uncovering Ancient Southern African Kingdoms” is the subtitle of this fascinating softback, jam-packed with a wealth of  information on both the stone palaces in Zimbabwe, Botswana and South Africa and the legacy of their early inhabitants, from AD 900 to around 1850.

Whereas most of us know about Great Zimbabwe, the others are little-known as are their ancient civilisations. Authors Main and Huffman have uncovered more than 566 of these stone palaces, many of which exhibit intricate and beautiful stonework, illustrating exceptional craftsmanship for building in stone without mortar.  Readers find out not only about the architecture, but – contrary to popular belief –that this African hinterland was the scene of much activity involving mining, commerce, transportation, farming and hunting.

The story begins on the fertile floodplain at the junction of the Shashe and Limpopo rivers, near the current border shared by Zimbabwe, Botswana and South Africa. This was the setting for human occupation from the Early Stone Age but it was around 900 that the first Bantu-speaking villagers  settled in the area where fragments of their pottery have been found. Known as Zhizo settlers, they probably hunted elephant, and traded ivory with those on the east coast, getting colourful glass beads in exchange. They were displaced about 100 years later when the Limpopo valley climate changed for the better, and  newcomers established a powerful ruling elite at Mapungubwe, the first of a  series of precolonial states.

Their settlement is known as K2 and endured  for more than two centuries;  the villages were laid out around a central cattle kraal  which also acted as a court and were surrounded by the female domain.  But this was a society in social flux, reflected by both changes in the village layout as the accumulation of gold and glass beads led to greater prosperity, and the cattle, formerly their wealth, were moved from their central position. The development of high and lower stature groups saw further transition around 1220 when K2 moved its capital to settle on Mapungubwe Hill, marking  a social revolution  from a farming community to a complex society with class distinctions and control of an international trade network. The leaders lived on the summit, headed by the king, his immediate family, guards, diviner and praise singers. Commoners settled on surrounding plains and this new structure is known today as the Zimbabwe Pattern and the social phenomenon as Zimbabwe Culture,

The importance of rain-making, the rainmakers and rituals involved are emphasised in a fascinating chapter that precedes the story of Mapungubwe’s demise and  the rise of Great Zimbabwe, one that is still subject of research and speculation. It was only in the late 19th century that Cecil john Rhodes, then prime minister of the Cape Colony organised a formal investigation of Great Zimbabwe which, while yielding little of archaeological significance, saw significant plundering of treasure even as the area become a tourist attraction.

Today it is a UNESCO World Heritage Site, protected  and preserved, and of huge appeal because of its size and beauty. To Africans, in particular the Shona, it represents deep ritual and spiritual importance. Readers  are given an illustrated tour of the three main parts of the ruins. By “reading the walls” we  learn of the symbolic meanings of the different patterns in the stones.

Subsequent chapters reveal  tales of other capitals: Torwa, Mutapa and Rozwi states. Each one reveals a fascinating story while recording  increased roles of the Portuguese explorers, traders and missionaries.

You may find, as I have, that one goes back to several sections of the book to take in information that you skipped over at first reading. Because this exploration of southern African kingdoms and their stone palaces involves a text  very concentrated  as it brings to life these societies. As  dense, in fact,  as the varied patterned walls that enshrine the stone palaces visited across southern Africa.

Myrna Robins signing books at one of her launches