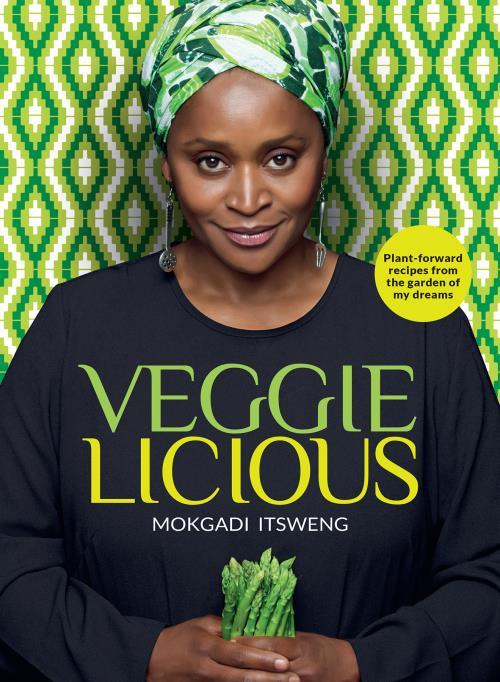 First up we examine Veggielicious by Mokgadi Itsweng, sub-titled ‘Plant-forward recipes from the garden of my dreams.’

After a difficult childhood peppered with allergies that re-appeared in adulthood when she was a food editor and chef, Mokgadi tried a vegan diet but still craved meat occasionally. She then  looked for a healthy and sustainable way of eating that would become a lifestyle rather than a diet.

Working with global chefs to highlight the United National Sustainable Development Goals, she was introduced to a food system that would help reduce climate change: A diet rich in plant-forward foods with fewer animal sources of protein.

She embraced this on her return, focussing on indigenous African dishes of whole grains and experimented with her well-loved paternal and maternal  grandmothers’ meatless meals. She went on to  recreate new and different ones that sometimes included free-range chicken and SASSi-approved fish.

Having regained her health, Mokgadi was ready to promote this plant-forward  diet that gives vegetables and fruits starring roles, sourced from  her tshemo or garden and that of her  mother. – (Tshemo is the Sepedi word for ‘garden’)

Recipes offer some surprises, such as her Rainbow Flatbreads, bright with beetroot, enriched with morogo, which she uses as taco shells, to mop up curry sauces, and as quick pizza bases.  Her homemade seasonings include herb salt, curry paste, green goddess sauce and coriander chutney.

The bulk of recipes are sectioned into seasons  – looking at the summer garden, we find beetroot hummus, Caprese wraps, chakalaka tartlets topped with yoghurt and a colourful mighty sogrhum salad. I like her savoury cheesecake with grilled honey grapes and for a sweet finish her passionfruit and coconut panna cotta makes a tempting finale.

Do love her cover portrait, complete with her drop earrings, one features a fork the other a small lifter, while she holds a bunch of fresh green asparagus. It offers an irresistible invitation to dig into the contents. 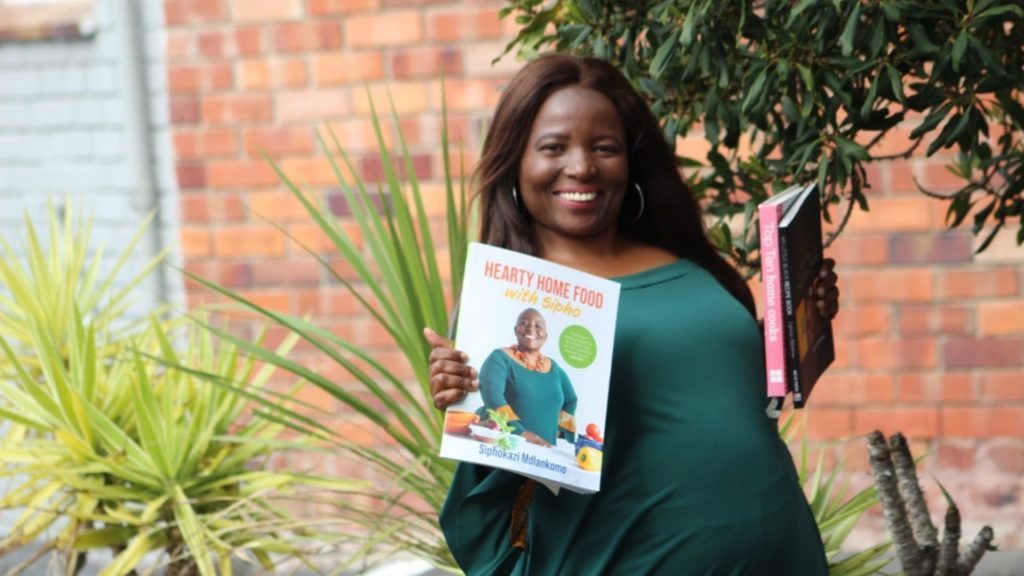 Siphokazi Mdlankomo one of my favourite Mzansi Cooks

For a more conventional indigenous collection of family meals, look no further than Hearty Home Food with Sipho by Siphokazi Mdlankomo. She focuses on simple, flavour-packed dishes that are affordable and shares tips and alternative ingredients  with every recipe.

We learn about her culinary career which started as a domestic cook in the home of a Cape Town family, who supported her burgeoning desire to enter –and win – cookery competitions . She  was a finalist in several of these and her employers also helped her to be appointed as a brand ambassador for Pick ‘n Pay  where her career took off – on television and now as writer for the supermarket’s popular Fresh Living magazine.

Homemade sauces, marinades and dressings start proceedings after which we move on to soups and breads and pasta staples. Her easy main courses follow: a layered potato and beef mince pie and chicken one-pot wonder both tempted, while pan-fried calamari with potato wedges and a cherry tomato and couscous salad  could fill the bill for warm evenings.

Under the heading Kick Back and Relax there are some delicious finger foods and snacks – her sausage balls with sauces or dips, baked marinated chicken strips, bolognaise and cheese toasties all tempt here. In her chapter on Sweet Treats and Gifts she starts with a very easy golden syrup cake, followed by a fancier milk chocolate sponge  and some puff pastry cinnamon cups. Her choc chip cookies look delicious (although this one is not for budget-beaters) She adds glamour to that old favourite banana loaf with a topping of cream and canned caramel treat, garnished with fresh banana or dried banana chips. Among the easy desserts is a  cheat’s Caramel Swirl Semifreddo, easy-peasy icecreams, and,  to finish an original gift of a jar of ingredients for cranberries and choc chips, complete with recipe attached to the jar.

The photographs add hugely to this collection – clear, tempting pictures of dishes, sauces, that will inspire many an inexperienced cook to get into the kitchen and whip up a delectable meal.

Both these titles are published by Human & Rousseau, Cape town, 2021.