Maggie: my Life in the Camp by Maggie Jooste, a review by Myrna Robins… 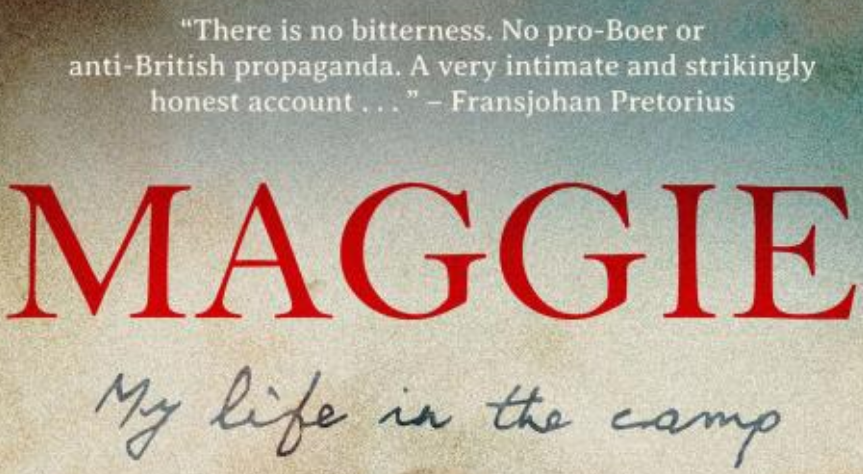 Maggie: my Life in the Camp by Maggie Jooste

Myrna Robins is one of my favourite writers, be it food, wine, history. She is a well known author, food judge and really the doyenne of the old school of journalists. She lives in retirement in McGregor. I am fortunate to be the recipient of her reviews to publish on my website.

Maggie describes her work as “the personal experience of a young girl of 14” and “not a work of history.” Professor Frans Johan Pretorius from the History and Heritage department of the University of Pretoria  sums this story  up well as a  “winner”   containing “…no bitterness. No pro-Boer or anti-British propaganda… but a very personal account of a young girl’s experiences during the Anglo-Boer War.”

The memoir opens  at the close of the 19th century, when Maggie lived a comfortable life with her family in Heidelberg, Transvaal. Her father was a successful wagonmaker and her mother a busy and industrious parent, wife, and seamstress, which was to stand her in good stead in the years ahead. With the outbreak of the Anglo-Boer war, the townsfolk were little affected at first, but by June 1900 the British had occupied Heidelberg and the lives of the  Jooste family changed dramatically. With their father and elder brothers having joined the Heidelberg commando, Maggie’s mother and  younger children were confined to their home.  However worse was to come, as six months on, they heard that they were to present themselves at the railway station for deportation to a camp. After three days and nights in a dirty cattle truck they reached the camp on the site of a rubbish dump. Each family was given a tent and three khaki blankets and a cooking pot. The Joostes had to share a tent with another family of three – each having 3 X 3.65 metres of space for adults and children. 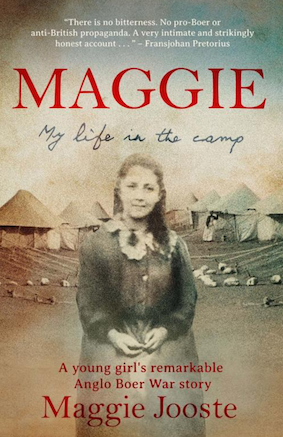 Maggie: my Life in the Camp by Maggie Jooste

Finding food, chopping wood, making fires outside to cook, washing clothes  filled days that varied from severe heat to winters that were wet and cold. Rations consisted of a small piece of meat for adults , oatmeal, a little sugar, bush tea or acorn “coffee.” Babies received a can of condensed mild every two weeks. Yet Maggie’s mother found time to act as a comforter of the sick, hold prayer meetings and start a Sunday school.

The camp doctor was a veterinary surgeon who knew nothing about children’s diseases: Maggie’s younger siblings were often ill  – measles, chicken pox, whooping cough and dysentery were rife –  with no treatment other than a large bottle of coloured water – presumably disinfectant. The year of 1901 was the worst, culminating in December when, during a time when the entire family was ill, little Gerrie, then 21 months old, died during the night. Maggie’s mother managed to make a little coffin from a plank of wood and lined it with butter muslin.

At this sad time they received their first letter from Maggie’s father, then a prisoner of war in Bermuda.

Peace was signed in June 1902 and this welcome news soon reached the women and children in the camps. The family was reunited, some months later, when their father  and older brothers made their way home to join them.

Part three sees Maggie setting her own life back on course, attending a seminary in Stellenbosch to catch up on her education. This ended when she returned home to help her parents financially by taking teaching jobs. She met and married a school principal Gawie Malan and they produced their first child in 1919 – who died during the great ‘flu epidemic that was still raging in parts of the Transvaal in 1921. Her daughter Anna followed and grew up to follow her parents in a teaching career, and it was in her home in George, with her grandchildren, that Maggie spent her last, happy years. She wrote the text in Afrikaans  when she was 62 and translated it into English herself.

As Heritage month 2020 sees South Africa struggling to cope with a global pandemic and a flagging economy, inspiring reminiscences like these help to remind us that, a mere 120 years ago, Afrikaans and English-speaking citizens were pitted against each other in the Anglo-Boer War, the effects of which linger on, even today.

Maggie: my Life in the Camp by Maggie Jooste is published by Tafelberg, Cape Town, 2020.

Tafelberg is an imprint of Nasionale Boekhandel

Myrna Robins, at a launch of one of her books