My brother Geoff and I were reminiscing recently about our grandmother, Trixie Bond, Mary Frances Beatrix McPherson as she was known before her marriage to our grandfather Frank Preston Bond.  She died far too young at a critical time in our lives as she fulfilled an important nurturing role for both Geoff and me.  She had a fabulous singing voice and often sang in a broad Scots accent the sort of musical hall songs which Harry Lauder would sing – and a heart rending version of Danny Boy the memory of which still clogs my throat when I hear the song.

In a way, she was a great influence on my early food likes and dislikes.  She was a great gardener and we always had a lot of fresh seasonal fruits and vegetables.  Like kale!  None of my friends were as keen to eat beetroot, the size of ping pong balls or liver, her Saturday lunch favourite with lots of fried onions and mashed potatoes.

She had her little favourites, Old Brown Sherry amongst them – she was not known to partake of a drink that often.  My grandfather however drank heroic amounts of Bell’s Whisky with room temperature soda was which he shot out of a soda fountain one of which he kept by his chair on the front stoep and the other by his chair in the sitting room. 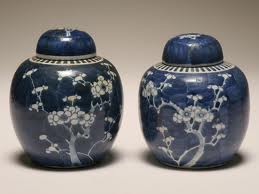 But her best thing was the jar of Chinese ginger preserved in sugar syrup which lived in a blue and white ceramic jar on the sideboard in the diningroom, on a saucer with a pickle fork on it.  After lunch she would walk over to it and take off the large cork top, stick the fork in and pull out a piece of ginger.  She would carefully wipe the ginger on the edge of the pot to remove excess syrup and pop the piece into her mouth and chew away – tears streaming down her cheeks from the heat of the ginger.

A loving memory, I will not forget until I turn my toes up one day!