Christmas on an African Farm, my experiences as a child…

Christmas on an African Farm, our view to the Simonsberg

The approach of the Christmases of my childhood was like a slow choreographed dance that took place from the time the schools closed for the annual summer holiday.  Each set piece of the dance had a huge impact on my senses.  I look back with nostalgia but use the moments of magic to buoy me up with a warm and fuzzy feeling inside.

In the vineyards on the farm on which I grew up, Dagbreek in Durbanville, the buds had set fruit and there were tiny little bunches of green grapes the size of pellet gun shot.  The grass growing in between the rows of vines had died and become a brittle brown mass and the heat of summer had set in.  We had to be careful walking through the vineyards for fear of the beautiful cobras and often came across tortoises resting in the shade under a vine and huge flocks of guinea fowl making their strange ricky ticky ticky ticky sounds.

In the winery – very artisanal compared to the stainless steel & polymer of today – things were being gussied up for the harvest which started early in the new year. Concrete tanks were scraped down inside to remove tartrate deposits and were scrubbed clean.  Perished hosepipes, all made of rubber then, were thrown away and replaced with bright new red ones with shiny brass fittings.  Coco pans, pulled by the horses into the vineyards to collect the grapes were serviced, and old tyres were used to make new brake shoes for the new vintage.

The heat.  At times waking up in the morning, the heat was unbearable.  We’d leave our bedroom doors and windows open hoping for cooling breezes that used to whisper over the vineyards from the Atlantic Ocean that we could see in the distance.  Oftentimes the front door would be left open too.  Always the back door.  In fact, I don’t recall the back door even having a key.  Anyway the dogs slept in the kitchen, so they needed to go in and out.  The heat seemed to hang silently, oppressively in the Norfolk Island Pines and Pittosporums that surrounded the farmhouse and the sun glare off the gables was almost blinding.  Birds sat open mouthed – there is a wonderful Afrikaans saying ‘dis so warm, die kraaie gaap’ and the dogs lay spread out on the back stoep in the shade.  Only the cackling wing-flapping Cape Weavers carried on their frenzied nest building activities.

Christmas was a time when the ‘Christmas Beetles’ or cicadas made their scything-screaming almost unbearably high-pitched sound in the trees outside.  I would wake up to it in the morning.  The sound would stop sometimes and for a short while, the silence would be deafening. 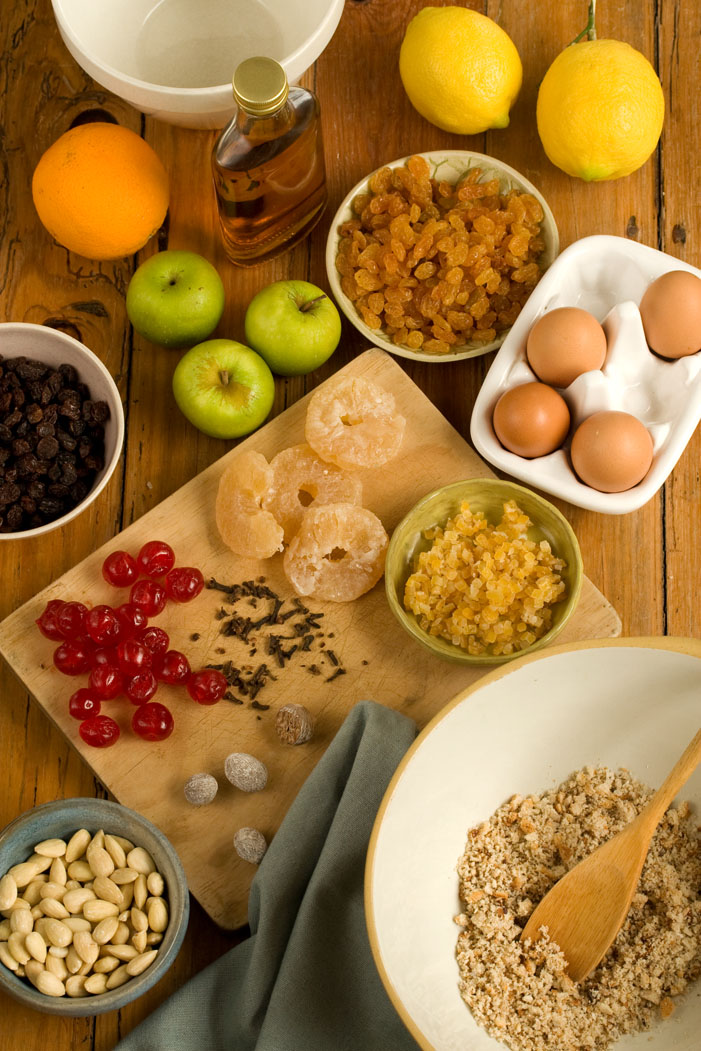 Ingredients for the Christmas Puddings, photographed for me by Sam Linsell

When I was a really little boy [in the 1950’s since you ask] my Scottish ancestored grandmother carried out the McPherson family tradition of making the black fruity Christmas Puddings in late November on Stir up Sunday, in the Christian Calendar known as the ‘Sunday last before Advent.’  This was usually done in the morning and just before they were steamed for the whole afternoon, each member of the family was made to stir in some silver tickeys, sixpenny bits, and little silver charms, stirred in one by one, each with a wish.  If you stirred clockwise, your successor stirred anti-clockwise. They are replaced now with one and two rand coins! I remember climbing up onto a chair to do it as a small boy.  I think the only thing my grandfather stirred into it was a generous slug of Bells Whisky, helping himself to a large noonday pre-prandial tot at the same time.

In the kitchen things were busy – really busy.  The kitchen was always overly warm in summer as the Aga stove was still riddled and filled up with anthracite twice daily by Dawid, our asthmatic old retainer, whom my mother kept going with digitalis for his weak heart and a regime of coloured aspirins for his various other ailments.  So the south facing kitchen windows with their fly screens stood open all summer too. 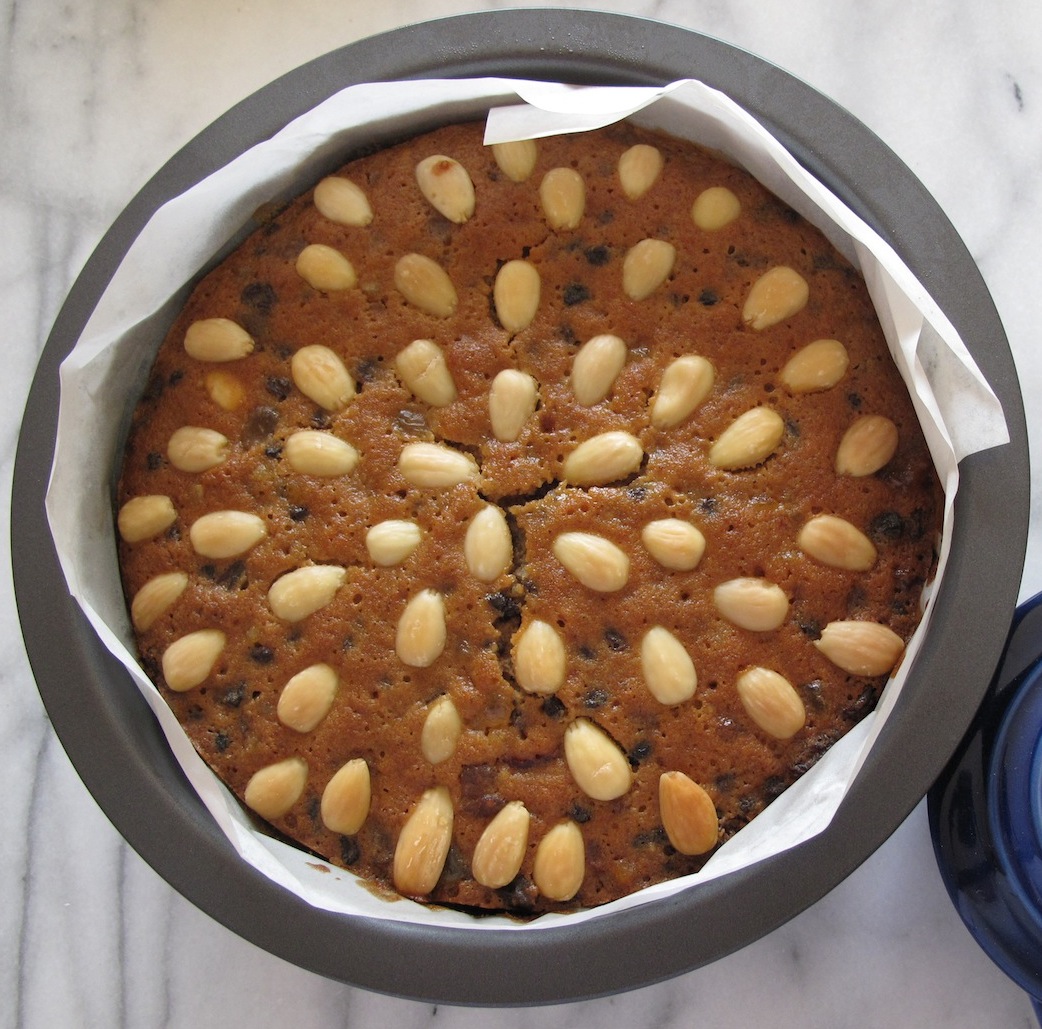 Christmas Cake before icing – ours for this Christmas

All the time the kitchen had that wonderful dusty, floury smell as shortbreads, mince pies, the daily bread and other wondrous things were baked.  Almonds were skinned and ground to make marzipan to cover the Christmas cake, which had been baked on Stir up Sunday and was stored in a muslin cloth which was opened regularly in order that some KWV five year old brandy could be poured over it.  Once covered in marzipan and stiff royal icing, which set like a rock, the cake was usually decorated with a little Santa sled drawn by reindeers and Rudolf with his red nose.

Though the Christmas puddings were made in November, there was always a flurry of late invitations for Christmas lunch when it became obvious that various friends would be alone at Christmas.  This at times necessitated last minute puddings being made when Aunt Muriel’s recipe would be used.

Mince pies were made with short pastry; lard was used to make it really crumbly.  And they were folded-over circles of pastry so that the mince pies were half-moon shaped and when cooled were doused thickly with icing sugar.

Early in the December holidays we were kitted out in our choirboy outfits for the Christmas Carol Service.  We would be taken down the avenue of gum trees into the village of Durbanville to the little Anglican Church of All Saints and into the vestry where the red cassocks and white lace-edged surplices smelling of mothballs awaited us for fitting, one size up from last year.  They would be taken home, mended where needed, laundered and the ruffles round the neck fixed with Robin Starch and ironed like circular concertinas.  And then the rehearsals would begin.  Round the piano in the upstairs sitting room two nights a week we would gather and sing.  And what a mixed crew we were.  Girls from the local reform school, known as The Girls Institute in their uniforms and berets, happy to be let out for the night and to grab a quick puff in the garden, ladies whose chins wobbled as they sang like elderly matrons eating marshmallows with no teeth, some of my fathers boozy friends who had sung tenor in their school choir and now sang bass and an aunt who had the voice of an angel who could sing descant versions of all the carols.  One of the bonuses was the tea served afterwards with its shortbread and koeksusters with mince pies putting in a brief appearance at the final rehearsal.  I still get emotional hearing those traditional Christmas Carols. 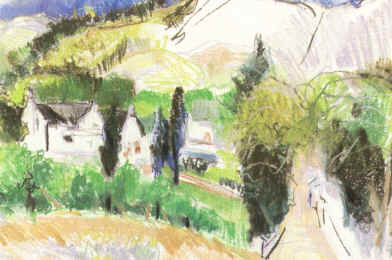 Another ritual was the preparing of the front stoep for Christmas and putting up the tree.  All the wooden furniture was carried down onto the lawn, cushion covers removed and laundered, cushions beaten to within an inch of their lives to remove dust, springs brushed clean of any rust and the rich oak and mahogany chairs and couches painted with linseed oil.  The floor was washed down with hot soapy water and red Cobra Stoep Polish was applied and then allowed to dry before being buffed up by the farm workers with large strapped brushes and sheepskin squares for the extra shine, they wore squares of sheepskin covered car tyres on their knees.  The smell of the polish seemed to hang around for days and grew in strength as the morning sun heated its gleaming redness.  And the cricket batty smell of the linseed oil was always present on Christmas morning at present opening time.  A huge Christmas tree was cut from the proliferation of pines on the lands and erected in a large bucket filled with stones and sand in the corner and we had the fun of covering the bucket with crinkly paper decorating the tree with streamers and tinsel and delicately blown glass balls.

On Christmas morning the kitchen was a hive of activity. While we never had turkey or goose, the wheezy Muscovy ducks that used to suck and blow in the mud round the dripping taps in the back yard were called to higher service, with some plump young hens and a couple of thyme scented legs of lamb landed up in the large roasting dishes in the Aga oven with large crisp floury potatoes, half onions, parsnips and turnips sizzling to crispness in the fat around them.  The air was fragrant with mint that was chopped and heated with vinegar and apple jelly to serve with the lamb.  With beef bones bubbling in a stock pot to make gravy.  With egg custard and vanilla for the sherry trifle and steaming Christmas puddings and overbrandied butter.  White fleshed peaches from the kitchen garden poached in syrup and late season strawberries were hulled.  Back then there was only a short three-month strawberry season from mid-September.

Apart from the sumptuous food, Christmas lunch was made up of crackers and those awful hats whose colour ran on the brows of our sweaty uncles and gently perspiring aunts.  There was fun and laughter, loving grandparents, aunts, uncles and cousins and feasting.

And how well I remember lying satiated under the trees on leather rugs and plump cushions after Christmas lunch, dogs gnawing on the discarded lamb roast bones, listening to the Lessons and Carols from Kings College Cambridge while we built up an appetite for the mince pies, shortbread and Christmas fruit cake that came with afternoon tea.

Christmas on an African Farm was an unforgettable childhood experience.