Crafting and Cooking on Appealing Guise, a book review by Myrna Robins… 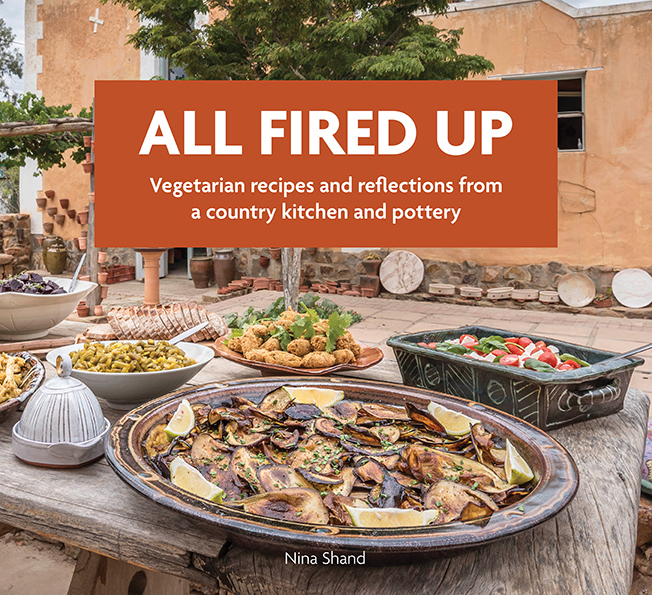 ALL FIRED UP by Nina Shand, published by Millstone Pottery, McGregor, 2019

Myrna Robins is one of my favourite book reviewers. This doyenne of food and wine writing, cookbook author, cookery judge, is always so fair and commentates rather than criticises leaving the decision to the reader. Myrna and her husband Verne live in McGregor.

“Vegetarian recipes and reflections from a country kitchen and pottery.” So reveals the sub-title, framed above a rustic table laden with colourful  fare presented on beautiful ceramic platters and bowls. Open this intriguing  softback and enter the mesmerising  world of potters and their wood-fired pots and dishes. Add a garden of  locally grown ingredients which, when cooked, will fill those pots with appetising feasts.

The relationship is timeless and as inspiring now as it has been for aeons. It is one that merges seamlessly in this collection of recipes both for fine fare and beautiful glazes, interspersed with  tales of a potter’s day, from dawn until dusk – and sometimes on into the night.

Let’s introduce Nina and Paul to the readers beyond McGregor, to those cooks and collectors of beautiful cookware who have yet to discover this magical village and one of its star attractions, Millstone pottery…

Myrna Robins at a book signing

Their life philosophy has not changed in decades, and it’s pure coincidence that the ethical lifestyle adopted by Nina Shand and Paul de Jongh and their family – treading lightly on our earth – is so in keeping with the present trend toward achieving this goal . They have always grown their own or bought organic and sustainably produced food, used solar energy and used predominantly wood for firing in their pottery. They gather wood during daily walks around the village, cycle rather than drive, stay with vegetarian meals and, to quote Nina, “…as a family, we reuse, recycle, make do, do without, compost etc.”

They also inspire  cooks, diners and other potters with their conviction that preparing and serving fare on handmade ceramic ware enhances the meal, increasing enjoyment as the vessels provide an intimate and tactile connection between makers and users.

Nina has structured the contents of her book around a busy potter’s day, based on one of her regular workshops when catering and firing are of equal importance. It all starts, naturally, with a bountiful breakfast. Recipes for muesli, granola, yoghurt,  rusks, muffins, cheese scones, nutty wheat bread and son Joshua’s irresistible cinnamon buns  follow each other, accompanied by appetising photographs.

Tea breaks during a workshop see visitors making friends, exchanging ideas as they fill their chosen mugs from the urn and indulge in Nina’s carrot cake or rosemary biscuits, crunchies, apricot shortbread and much more, the goodies enhanced by a series of striking dishes which are described along with the recipes.  It’s hard to know which is more tempting – a wedge of pale, berry-topped  cheesecake or the dark wood-fired slabbed dish on which its rests.

It is appropriate that Nina and Paul live in one of McGregor’s most historic houses, its venerable walls enclosing scenes of winter lunches of soups, breads and cheeses, or summery fare of substantial and colourful salads and tarts, washed down by homemade lemon cordial. The individual spinach quiches simply beg to be lifted off a magnificent tray with half-moon handles. Glazed with a green Oribe  glaze and fired in an electric kiln, it sports traditional Japanese Nuka glaze, made from grass ash.

The lunch recipes are followed by a short chapter on finishing, that even non-potters will find fascinating – the process of firing in one of their four wood-fired kilns is described, including the laborious process of processing wood ash to the point where it can be made into a glaze. Salt-glazing is an equally absorbing  firing process.  Millstone hosts visiting potters who are required to help operate their annual wood-firing jamborees where crews take shifts, working around the clock to load and fire the work.

After a long and busy day, workshop participants settle to a dinner which could star lentil bobotie, vegetable curry, chilli or lasagne, pasta and moussaka, finishing with chocolate cake or tiramisu, or lemon ice cream.  A few pickle and preserve recipes conclude the food section and there’s a page of glaze recipes which Millstone has perfected over the years. The combined index has been well compiled – making a fine finale to a title that is not only informative and a visual delight,  but one that takes the creativity of crafting and cooking to a level that is pretty unique. Nina Shand has combined  the two to produce synergetic results, where practical meets mystical  in understated, very appealing guise.  All Fired Up is a product of the real, all-embracing McGregor at its intrinsic, unassuming best.

To get your copy, visit Millstone Pottery in Bree Street between 9am and 6pm Monday through Sunday or contact Nina on 072 544 2145 or nina@millstonepottery.co.za to order a copy.  The book costs R280.