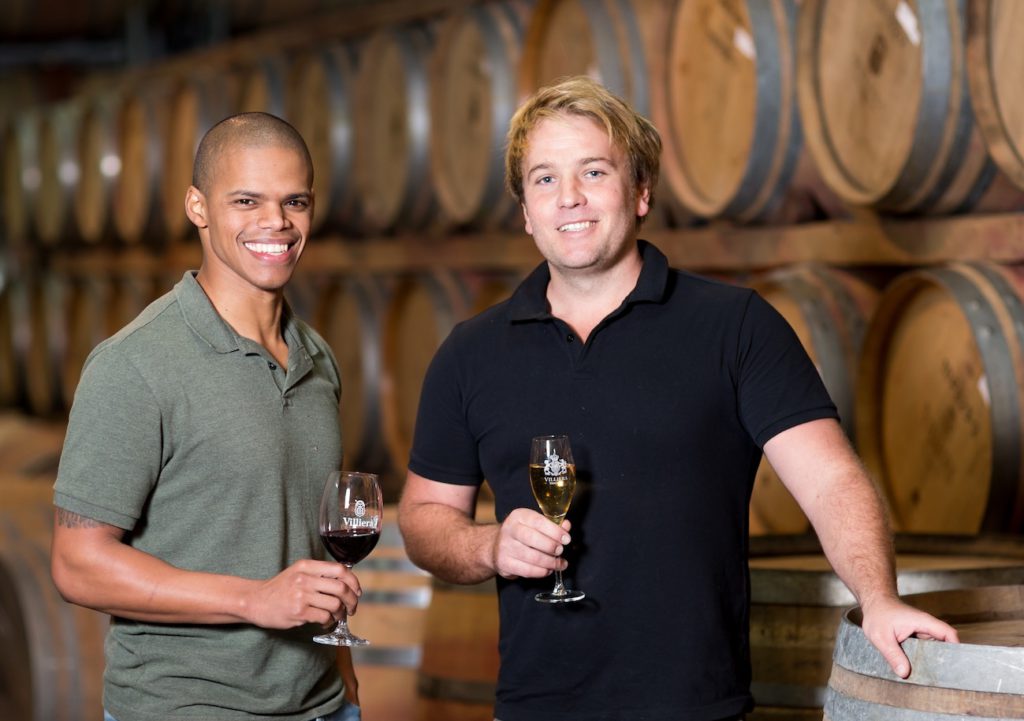 We have recently added some youthful energy to the Villiera winemaking team in the form of Nathan and Xander.  Jeff is going nowhere yet – he remains to nurture these two young, talented winemakers. Giving them freedom to try new things and at the same time ensuring that the value, pioneering spirit, consistency and innovation that Villiera has become known for over the years is passed down.

Nathan Valentine joined Villiera as a full time Winemaker in December 2016.  His mom grew up in the Elsenburg farming community and his dad grew up on Kanonkop Wine Estate – a long family connection to the wine industry.  He graduated from the Elsenburg BA Agric program, specializing in winemaking, in 2013.  In his student years he worked in the Villiera tasting room and developed a love for Cap Classique.  After graduating, Nathan worked vintages at De Morgenzon, Chandon (California) Villiera, Domaine Grier (France) and completed the Cape Wine Academy certificate course.  He has a positive can-do attitude and a sense of adventure and we welcome him to the team.  In his spare time Nathan can be found power lifting and has been known to play a rugby game or two.

Xander Grier is the first of the 4th generation of Griers to join the family business.  He is the son of extreme adventurer, inspirational speaker and Chef, David Grier.  Xander was born just after the Grier family purchased Villiera. He graduated in 2010 from Stellenbosch University (BSC Food Science).  Before and during his studies he worked at Villiera and completed the Cape Wine Academy Certificate course.  He also worked as a chef, barman, gardener and lifeguard in SA, Mozambique and the USA.   Before graduating Xander had already decided that he wanted to be a winemaker and decided the only way was lots of hands on practical work.  He worked vintages at Villiera, the USA, Australia, Tasmania and Domaine Grier France.  In 2013 he was a consulting winemaker at Highlands Road estate in Elgin and then joined La Vierge in the Hemel-en-Aarde for 3 vintages.  He moved to Villiera Wines as a full time winemaker in May 2017.  In his spare time he can be found surfing, hiking or cooking up a storm.

We are sure you will be tasting and enjoying a number of great wines created by this team.  There are a number of new wines in the pipeline for the end of this year, which were already in the pipeline before they joined.  Something new and top end takes a lot of time and planning.  Watch this space – these wines will be the first of many good things to follow.   They will be revealed as they are released.