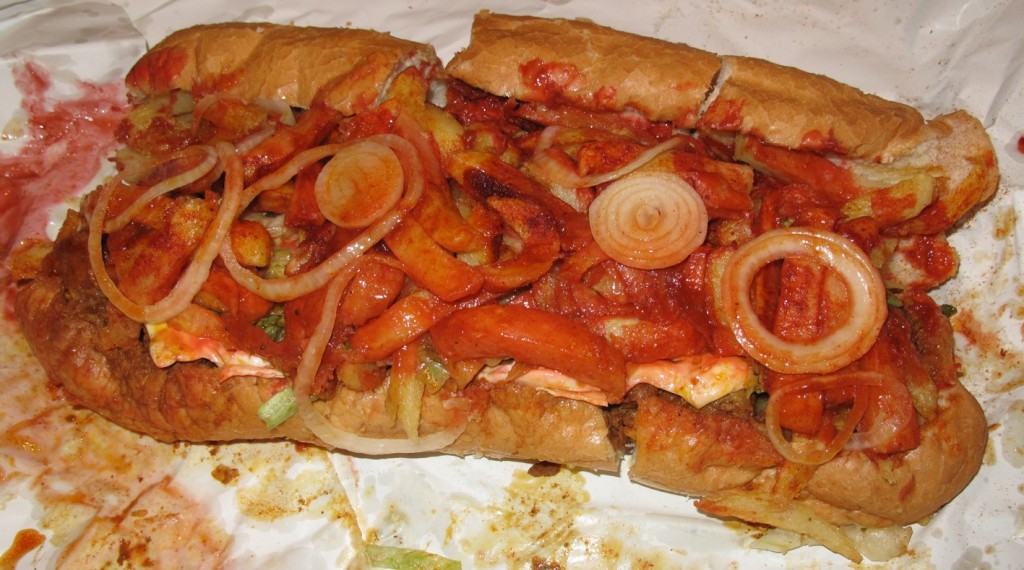 My son Peter and a group of his friends one Sunday morning after a particularly happy Saturday evening went down to the bottom end of Ottery and bought for themselves for breakfast a Masala Steak & Egg Gatsby – a culinary experience which hitherto had escaped me.

Wikipedia tells us that a “Gatsby is a South African style of deli sandwich very similar in content and method of preparation as a hoagie in the USA. It is mostly popular in the Western Cape Province. It is very popular because of its low cost and great appeal.

Gatsbies usually consist of long bread rolls cut lengthwise and opened up to form a sort of cradle which is filled with various fillings. While the choice of filling in a Gatsby varies widely depending on customer preference and vendor, one standard item is usually hot chips i.e. French fries.

Gatsbies originated in the Cape Flats area of Cape Town, where people would often buy large rolls and fill them with whatever leftovers they had, and split them four ways. This practice has carried on in modern times, with Gatsbies being bought in full, half or quarter sizes.”

I sent the picture to my friend TV Chef and well known cookery writer Sonia Cabano who said that the photo “looks like a train accident, as any self-respecting Gatsby should. I’ve tried several Gatsby’s on my son – some sold along the promenade during Xmas hols, with a lurid day-glo red sauce tasting faintly of cinnamon derivative and chemical acetic acid. And Texies on the parade do a good one, although stodgy and heavy on starch, too little sauce. I make them at home with crisp fresh Pick n Pay french loaf, lettuce, fresh tomato, slivered red onion, sliced bockwurst, german senf, chip sauce and ketchup. And oven fries. Usually manages to keep the kids out of the kitchen for an hour longer than usual. 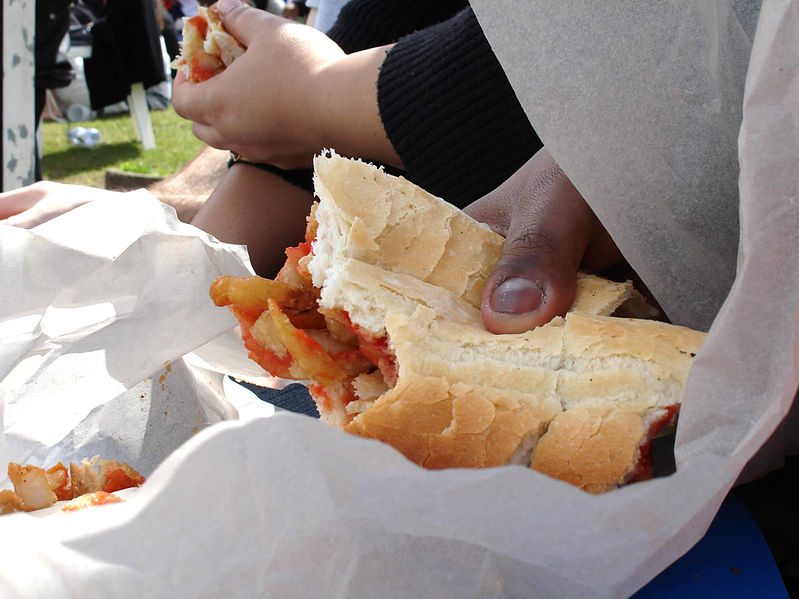 I have a very interesting book on street food, and it devotes pages to peasant sandwiches that could hold their own against the Gatsby. The hoagie is undoubtedly one of them. Chicken fried steak and gravy on a roll is another delicacy. But none so good as Louisiana po’boy, I reckon – crispy crumbed deep fried oysters stuffed inside a baguette, served with relish or remoulade, I think. And if that sounds très gourmet, remember a po’boy was once a musician’s or late-night reveller’s snack to ward off a hangover after a night on the tiles, easily afforded when oysters were still dirt cheap and REAL poor man’s fare.

But few could challenge the Gatsby from its majestic, gaudy, soppy, saucy throne, I’d say.”

Now you know about a Gatsby!