At a Chef’s Table in the Planet Restaurant Kitchen of Cape Town’s iconic Mount Nelson Hotel. midst the hustle and bustle of mis-en-place preparation for dinner, a small group of us sat down for lunch yesterday to be treated to a six course lunch of little gems, with popping flavours not for the feint of heart, prepared by Rudi Liebenberg, the hotel’s Executive Chef and his team for a series of wines from 150 yr old Robertson Wine Estate, Rietvallei. 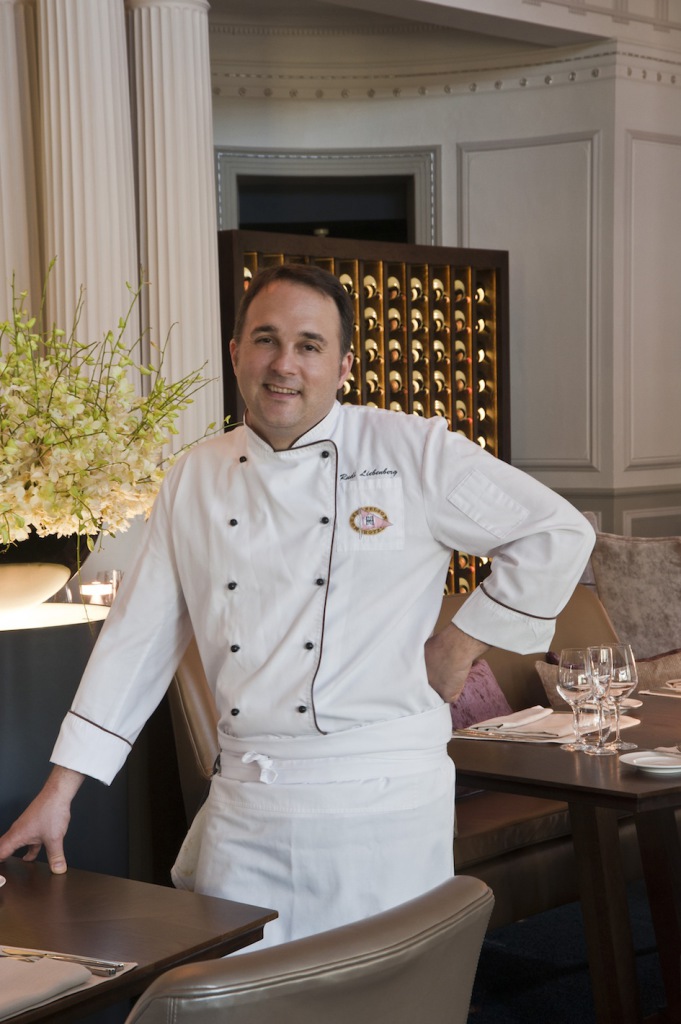 Each course meticulously matched to a wine from Robertson’s Rietvallei Wine Estate, whose current owner, 6th generation Kobus Burger and his wife Elizabeth were our hosts.  This year, the Estate has been in the ownership of the Burger family for 150 years. 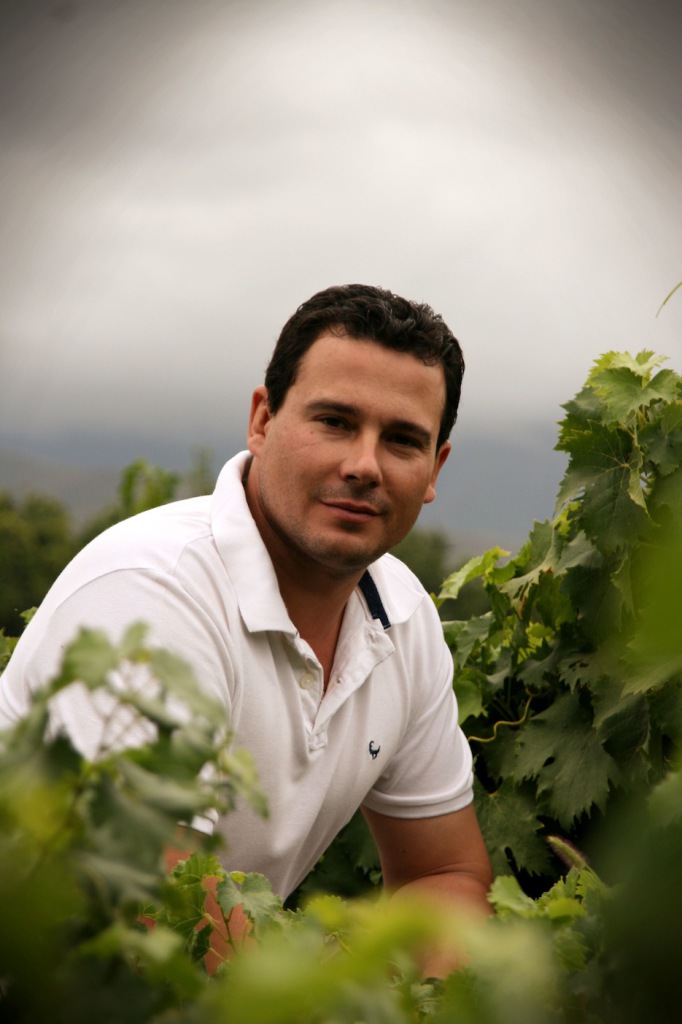 The occasion was to mark not only a shift to bring all Rietvallei Wines under the Estate label rather than the Special Select and Classic labels, but also to launch two new wines made by Kobus to honour his late father, Johnny Burger.  The wines are a fitting tribute to the 5th generation Burger who did so much to bring Rietvallei into the modern era.

Cleverly matched to what I thought was a genius dish, Crispy Fried Egg, char-grilled asparagus, chorizo hash and spinach velouté was the Rietvallei Estate JMB Chardonnay 2014.  The egg was panko crumbed with the yolk still running to form a sauce with the asparagus and chorizo hash.

The Vineyard
This single, south east facing vineyard was planted on the Estate to Chardonnay [Clone 95C] in Robertson’s classical lime and chalk soils in 2004. The vines are trellised and under drip irrigation. Selection of the vineyard at pruning time and its management up to harvesting ensured a low yield of 8 tons per hectare.

Winemaking
Picked by hand at 24° Balling, the grapes were crushed and free run juice only was taken and settled to clarity.   The wine then fermented dry naturally using wild yeasts from the vineyard in 300 litre French Oak Barrels. After the alcoholic fermentation, which took four weeks, the barrels were tasted. Only those showing the most potential matured for a further eight months on the primary fermentation lees with no malolactic fermentation taking place. The barrels were tasted, scored and rated for the selection of the finest barrels for this special release. Bottling commenced on October 14th 2014.

It looks like: Elegant black label with the initials JMB and Rietvallei prominent.  Pale citrine gold in the glass with green amber flashes around the edges.

It smells like: Rich windfall citrus, like good orange preserve. Oak and its spices support the fruit.

It tastes like: Rich harmonious mouthfeel. Ripe oranges with lemon and lime. Oak in the background. Perfect balance of quality fruit, oak, mouthfeel, acidity and length of aftertaste.

One of the only of its type in the Robertson Valley, the Rietvallei Estate JMB Cabernet Franc 2011 is a total joy of a wine.  Fruit, spice, oak, encapsulated.  Rudi and his teammatched it to Suckling Pig with cabbage salad and soft grits.  And the wine met it head on – a great match.

Vineyard
The grapes for the Rietvallei JMB Cabernet Franc 2011 come from a single Cabernet Franc [clone 623B] vineyard planted on the Estate in 2003 in Robertson’s classical lime and chalk soils. The vines are trellised and under drip irrigation. Selection of the vineyard at pruning time and its management up to harvesting ensured a low yield of 5 tons per hectare.

Winemaking
Picked at optimum ripeness at 25 °Balling [Brix], the grapes were de-stemmed and given a slight crushing. The mash was taken to open concrete tanks where it was allowed to ferment naturally using the yeasts from the vineyard. During fermentation process the temperature was regulated at between 25ºC and 28ºC. The cap of skins, to keep it cool was regularly given a traditional manual punch-down every two hours. Pumping-over of the must onto the skins allowed the colour and flavour to be extracted very effectively. After five days to ferment the wine dry, it was left on the skins for a further 5 days before racking and pressing. After malolactic fermentation started in the tank, the wine was transferred to new 300 litre French oak barrels where it matured for 26 months. Bottling commenced on 18 August 2014.

It looks like: Elegant black label with the initials JMB and Rietvallei prominent.  Rich dark ruby at the core which pales to garnet at the rim of the glass.

It smells like: Rich roadside bramble fruit and ripe prune plums. Pencil shavings without the lead, oak and its concomitant spices in support the fruit.

It tastes like: Full palate of berry fruits and plums. There is a fynbos herbaceousness in the wine that has a delicate elegance to it. Soft tannins, undertow of oak and brown spices. A single thread, perfectly balance of quality dark fruit, oak, medium to full mouthfeel, acidity, soft tannins and dry long aftertaste.

The Rietvallei Wines served before and during the meal were all benchmark examples of the variety.  The Rietvallei Sauvignon Blanc 2014 was the perfect Aperitif with Rudi’s quirky canapés.  It was good to taste again the Rietvallei Estéanna White 2014 with the seafood salad and spicy broth and the Rietvallei Estéanna Red 2010 with a truly tender lamb loins wrapped with mushroom, broad bean salad with porcini.  The best was definitely kept to the end, the dessert, a classic, Peach Melba [with a couple of amusing twists] was served with the Estate’s iconic Rietvallei 1908 Red Muscadel 2011, grapes from a small single vineyard actually planted in 1908. 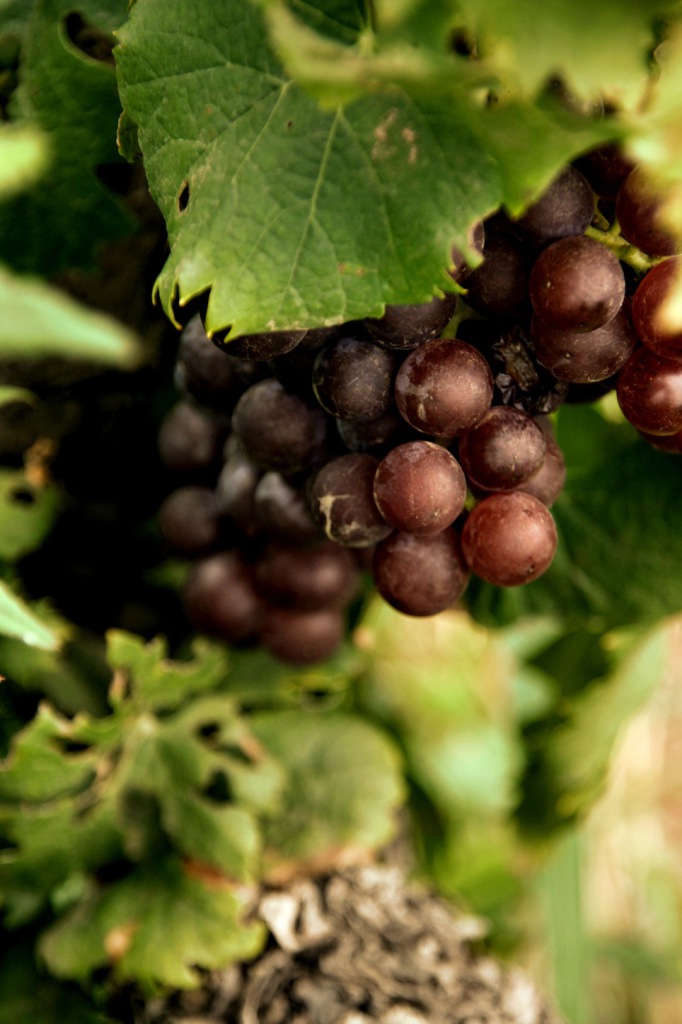