My first pot of Yoghurt 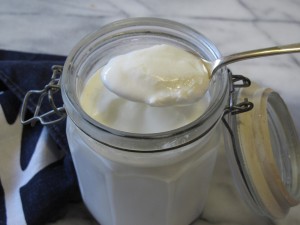 There are foodie things I have wanted to do for a long time, and know how to do and can talk knowledgably about, but I don’t actually get down and do them.

Last weekend I did – I made my first pot of yoghurt.

I have a friend, Sophia, who grew up in Douglas in the northern Cape.  She is of Lebanese extract and learnt a huge amount about food from her Lebanese grandmother – and the Lebanese know about food.  Sophia gave me the cutest little white enamel bucket full of Laban – a thick Lebanese yoghurt she had made herself.  Sophia writes an innovative article each month in Crush, my online digital magazine.   Called 4 ways with… her next offering is Milk.  You can visit her website – click here.

I knew how to make yoghurt, so I did it.

And what a joy it is.  Never will I buy yoghurt again.

I started in the early morning and took the last 100ml or so of the yoghurt from the bucket and put it in a bowl.  I brought just to the boil a litre of full cream milk.  Let it cool a bit, but not too much, my finger was still stung by the heat.  In the bowl, I mixed the yoghurt with a little of the hot milk and then whisked it into the remaining milk in the saucepan.  I had a jar with a sealable lid – you can see it in the picture.  I wrapped it in a tea towel and then popped a tea cosy on top and left it for 12 hours.  It had thickened up beautifully.  It spent the night in the fridge and we had it for breakfast in the morning.

And it was delicious!

Now I am going to try and flavour it with some of Paul and Tracy’s NoMU Vanilla Paste.  Should be good! 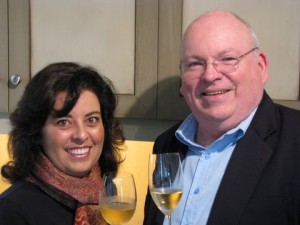