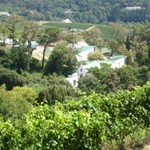 Eagles’ Nest is on the road up to Constantia Nek on a former part of Simon van der Stel’s Groot Constantia Estate, in the oldest wine appellation in South Africa.

Aptly named, I have seen Black Eagles swirling in the skies above the Estate; it is, what must surely be, the highest vineyard on the Cape with its slopes facing North, East and West and has the most spectacular views over the Cape Peninsula and looking north up the side of the Table Mountain massif. 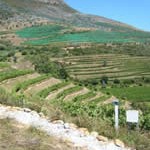 In 1984, a section of the original Eagles’ Nest was bought by the Mylrea family who spent the next 16 years eradicating alien vegetation and re-establishing indigenous species, particularly protea, and planting vineyards and kiwi hedges. After a massive forest fire in 2000 destroyed their table grape, kiwi fruit and Protea farm, all the forestation and leaving only some farm buildings and the Manor House, brothers in law Jonathan Mylrea and Peter Stewart decided to return to roots and replant the farm with wine grapes on some of the steepest of vineyard slopes.

Merlot and Shiraz were chosen and a small vineyard of Viognier was planted to be used as a co-fermenter with the Shiraz, but the quality of the Viognier has been such that it is bottled as a varietal wine.

A brand new state-of-the-art winery was commissioned in time for the 2008 vintage.

The revelation for me was tasting the Eagles Nest Shiraz early this year, and I wondered at the time whether this was a cult winery in the making.  It went on to win an award for the best wine first year of production at The Swiss International Air Lines Wine Awards and then went on to win a trophy for the Best Shiraz and one for the Best Red Wine on Show at The Old Mutual Trophy Wine Show, arguably the premier Wine Show of South Africa.

EAGLES’ NEST SHIRAZ is a typical cool climate Shiraz.  Lots of ripe blueberries and hints of mushroomy forest soil on the nose followed by full red and black berries, freshly roasted coffee beans and dark chocolate on the palate.  There is a soft acidity and gentle ripe rolling tannins that make this a delicious food wine.

EAGLES’ NEST MERLOT is also a typical cool climate wine.  And it is so Merlot. Fresh red berries and plums on the nose with an element of spice.  On the palate there is a wave of mulberries and dark red cherries. The soft acidity and excellent French oak and vibrant fruit are all in perfect harmony with the ripe tannins.  Elegant wine.

EAGLES’ NEST VIOGNIER won a Bronze Award at the 2008 Swiss International Air Lines Wine Awards.  So different to the Viogniers we are used to in the Cape, the Eagles’ Nest is more reminiscent of a New Zealander from Hawke’s Bay.  Fresh sliced white peaches, soft dried apricots, floral jasmine and frangipani all bathed in honey.  Full of flavour, almost oily with the vanillins from the oak being supported by a sparky acidity. 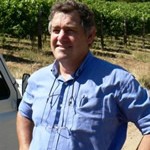 There is more – much more – to come from Eagles’ Nest.