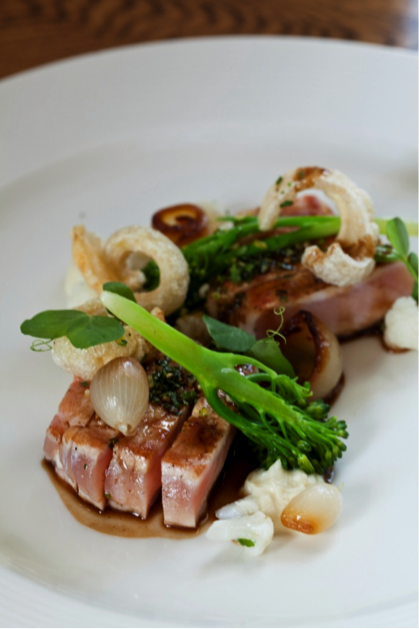 Bertus Basson is one of the most eclectic chefs I have met.  From the finest of fine dining to cooking over a fire in the bush or serving sausage dogs from the back of a caravan.  He does it all, with such style!

Combine all the ingredients for the spice rub and rub the pork steaks and leave to marinate in a fridge for half an hour.

For the crackling
Cook the pork skin in boiling water until soft.
Dry the excess water off, using a knife score the skin in both directions without cutting through the skin.
Rub the vinegar over the skin and then season with salt.
Leave the skin to dry out over night in a oven on 40 C
Break the dried skin in to pieces and deep fry in oil until light and crispy.

For the pork steaks
Heat a oven proof pan with oil and put the steaks in the pan searing them on both sides.
Put the pan in the oven for about 5 min.
Allow the pork to rest for 3 minutes before carving and serving.

Cook the peeled onions in salted boiling water until tender. Cut them in half and caramelize them with the cut side down in a hot pan with oil until they are golden brown.
Season with salt and pepper.

With a vegetable peeler gently peel the stems of the broccoli.
Cook them in salted boiling water for 3 minutes
Take them from the pot to a pan with the butter glazing them and season with salt and pepper.

With a small kitchen knife just cut the cauliflower in to smaller florettes
Cook them in boiling water for 2 minutes.
Put the florettes in a pan with the butter to glaze and season with salt and pepper.

To assemble
Place the carved pork on the plate first then arrange the rest of the vegetables around it. 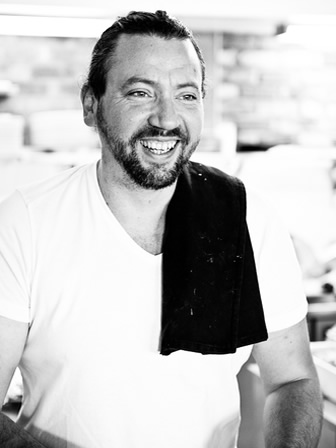 Highly acclaimed South African Chef, Bertus Basson, is famed for the phenomenal success of Overture, a restaurant he has had an integral part in establishing as one of the finest in South Africa in his position as a chef and owner since 2007. The picturesque winelands restaurant has won 5 Eat Out top 10, currently Overture is placed fourth, Overture has also been awarded 3 stars in the Russouws Restaurant Guide for 4 years running.
Bertus’ commitment to great food made with fresh, local ingredients and an acute attention to detail is the key to his culinary success for which he is highly regarded.
Bertus has excelled as a competition chef and restauranteur.  He is currently appearing as a judge on The Ultimate Braai Master, a South African reality cooking show which airs on Thursdays on etvv at 20h30.