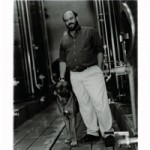 Danie Truter has been making wine for over 30 years, I certainly knew him in 1977 when he washed out his first tanks just after completing his Cellar Technology studies at Stellenbosch University’s Elsenburg Agricultural College, stamping ground of many a well known South African winemaker.  At the time he was working at Simonsig Wine Estate and had the most beautiful and aristocratic Borzoi that could pick up the winemakers miniature dog in her mouth, her party trick in the tasting room, which at the time was run by Madeleine.

Danie moved on to bigger and better things at Gilbey’s, whose Hartenberg Estate he was eventually charged with developing as a premium wine-producing farm.

Twenty years after we first met, Danie and Beat Musfeld bought Onderkloof Estate.  Onderkloof Estate is situated east of Somerset West on the south facing slopes of the Schaapenberg that creates a unique microclimatic condition, enjoyed too by the well-known wine estates Morgenster and Vergelegen.  From our house in Gordon’s Bay we could look across to Onderkloof and the Schaapenberg, in the Helderberg bowl, would be swathed in delicate cloud, even in the height of summer, creating a coolness which allowed the vineyards to ripen at a slower pace meaning more flavour in the grapes and the resulting wines.  The cloudy coolness is assisted by maritime breezes off the cool South Atlantic Ocean whispering in as the heat of the day rises. 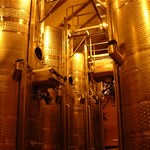 Danie’s unique talents as a winemaker for me lie in his ability to create depths and breadths of flavour, plumbed by few, as in his Onderkloof  Cabernet Sauvignon 2006 with its layers of tastes of raspberries and blackberries and blood plums which he counterpoints with some ‘energetic’ oaking in fine French barrels.  His Onderkloof Shiraz 2007, has lovely treacly smells and forward roasted berries and the spicy vanilla lent to it by his superb barrels.  Ditto the Onderkloof Pinotage one of my favourites with its nostalgic smells reminding me of the creamy sunwarm mulberries I picked from the trees in our garden as a boy.  Mulberries blended with other dark fruits, all in unison with the fruit acidity and wonderful vanilla and toasty oak. Both 2004 and 2007 vintages of the Pinotage are available.  All three of these reds are from single vineyards each with its own microclimate.  There’s also a delicate unwooded, every day easy drinker made from Merlot and Malbec – a Bordeaux grape variety becoming more evident in the Cape – called Onderkloof Floreal Rouge 2005. 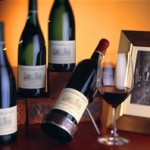 To visit Onderkloof Estate to taste and buy their wines, give them a call first to make an appointment.  The welcome will be warm.  And the Borzoi – sadly – will not be there to pick your miniature dog up in its mouth.  Shumba the Ridgeback and Kobyn the Boxer, who is the farm jester, lord it over the tasting room.  Kobyn’s playmate is Bombolini the Jersey Bull died recently, but you will find wines there named after him!