Get thee hence unto Urbanologi with undue haste… 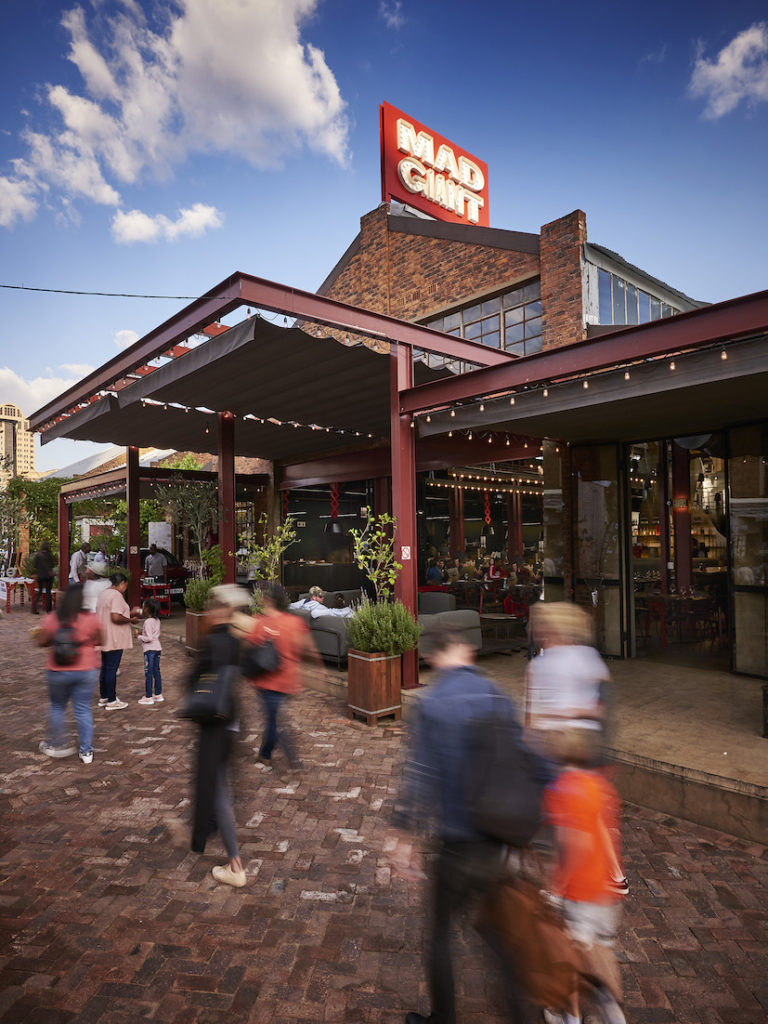 In Cape Town, you will always hear from a local, Cape Town has far better restaurants than Johannesburg. Don’t you believe it, there is a National Top Ten potential Restaurant hidden away at the bottom end of Fox Street which from a food point of view knocks many contenders into a cocked hat. The restaurant, Urbanologi, is in front of the Mad Giant Brewery, or perhaps the Brewery is behind the Restaurant. The place reminds me so of one of my favourite Perth Restaurants, Little Creatures, a restaurant and brewery in the gentrified Freemantle Harbour. 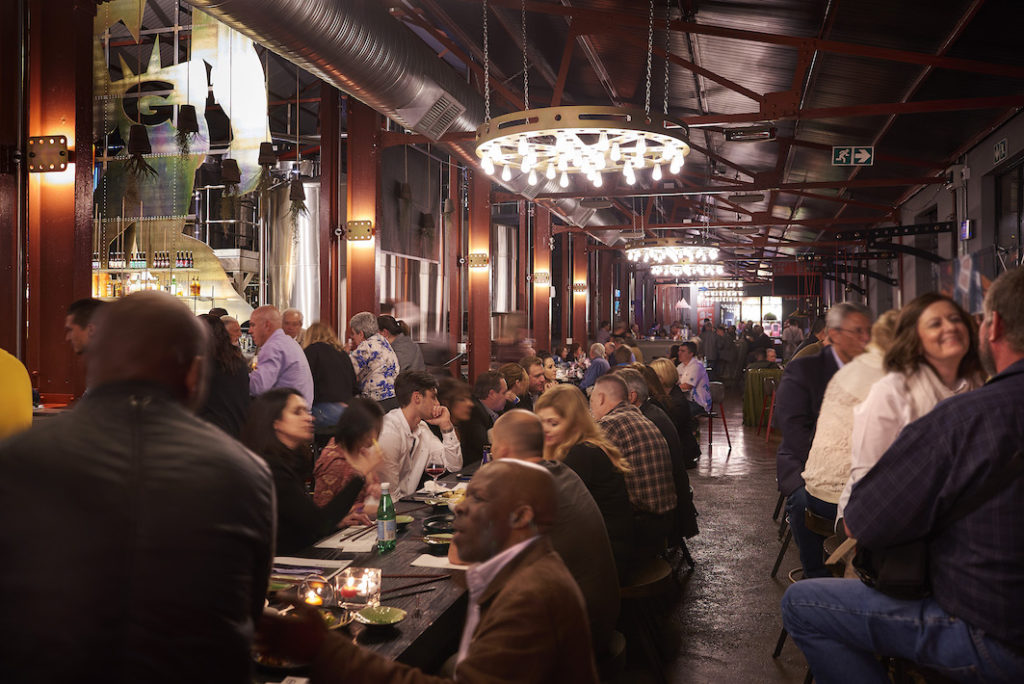 This popular destination is located at the ever-expanding 1 Fox Precinct, in the CBD district of Ferreirasdorp and a neighbourhood that has been revived. The vibey nearby Newtown Precinct is home to the Market Theatre, Turbine Hall & Boiler House, Ginologist Distillery, Inner-City Rooftop farming projects, and the iconic Mandela Bridge. 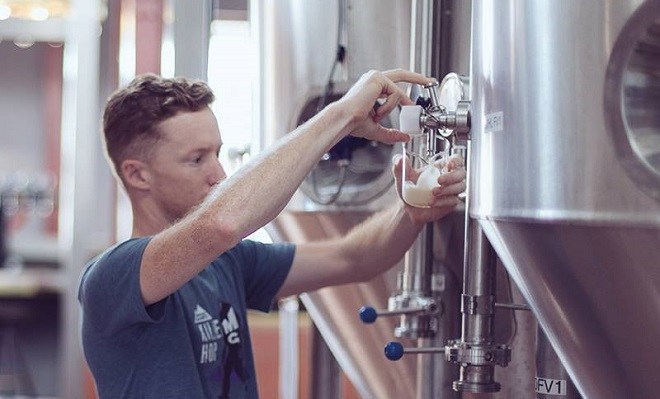 Let’s deal with Mad Giant first. Owned and operated by a young man called Eben Uys, the brewery makes some truly fine beers. The Weiss being my favourite, it’s called Electric Light Rock It Weiss. One of the happy things is that you can order the beers in a variety of tasting sizes so that you can find the one you like best and then buy a couple of 4 packs by adding them on to your restaurant bill. Read more about the brewery and its beers – CLICK HERE. 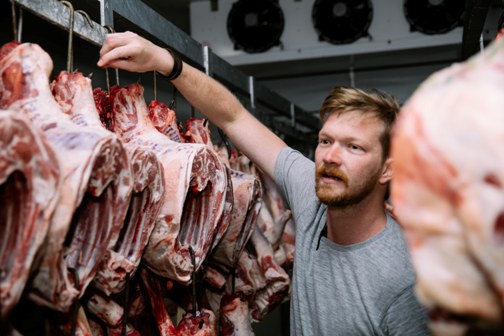 Now to the food and the Chef. I was so pleased to realise that Jack Coetzee was a student at Silwood Cookery School in Cape Town. I used to do an annual wine talk there early in the year to get the students thinking about wine. After graduating, Jack worked in some pretty fine establishments including the Award Winning Test Kitchen.  It is easy to say someone is passionate about what he or she does. Here is someone truly passionate. His #Project150 which was launched earlier this month is about food miles and not bringing produce into the restaurant which was produced further than 150 kilometres away from New Town. So, he has had to go and search for suppliers.

The menu encompasses six categories that align with the slow food idea to build relationships with suppliers: Butcher, Baker, Brewer, Fishmonger, Green Grocer and Dairy. It includes the distance in kilometres that food travelled to get to the table, putting a pin on a map of where the produce comes from. 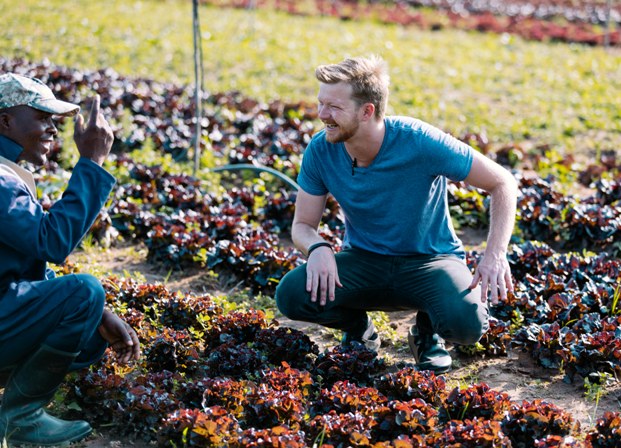 Goats Cheese from the Dutch Goat Farm in Randfontein owned by a lady who hand milks her little herd of goats and makes magical cheese. Served on a stunning cheese board with thin crisp toast, red onion marmalade and the finest comb honey I have ever eaten. 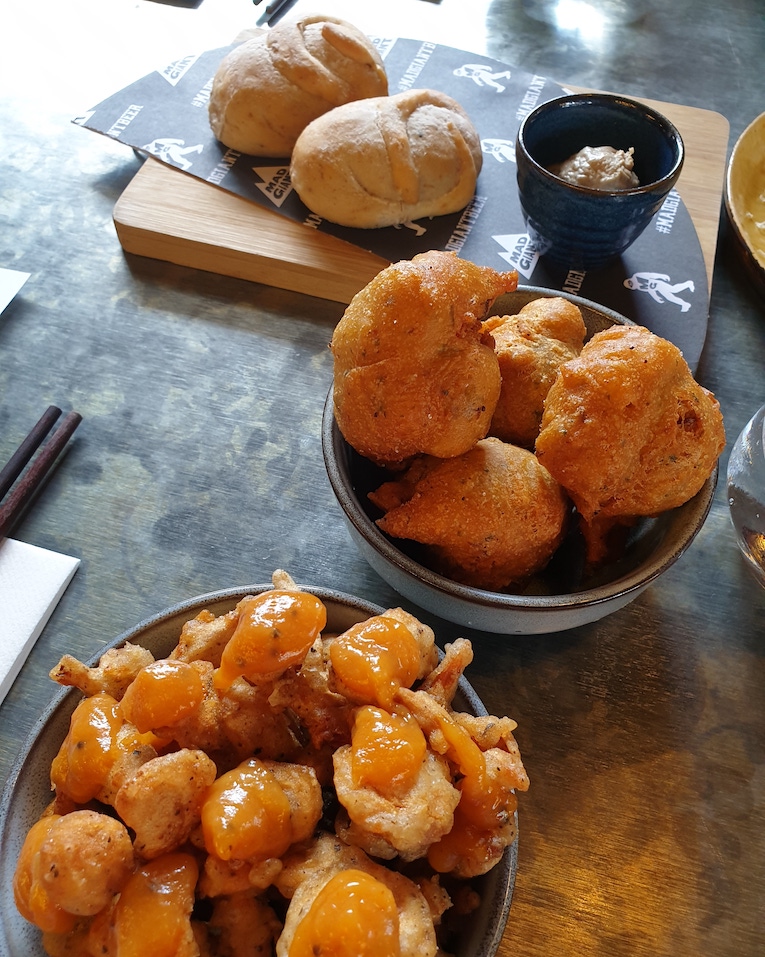 Farmed Tilapia, from Hekpoort cut into goujons and set in a bowl with a delicious sauce tartare at the bottom, so that when you pulled them out there was a little coating on the tip. The most delicious green asparagus from Clydesdale with shiitake mushrooms, matured goat cheddar and a smoked garlic relish. Tempura Shimeji Mushrooms, Sweetcorn Daltjies, with a little dipping bowl of Vietnamese Chilli Sauce. It goes on and on. Baby Gem Lettuce with a carrot dressing, cucumber and Macadamias. 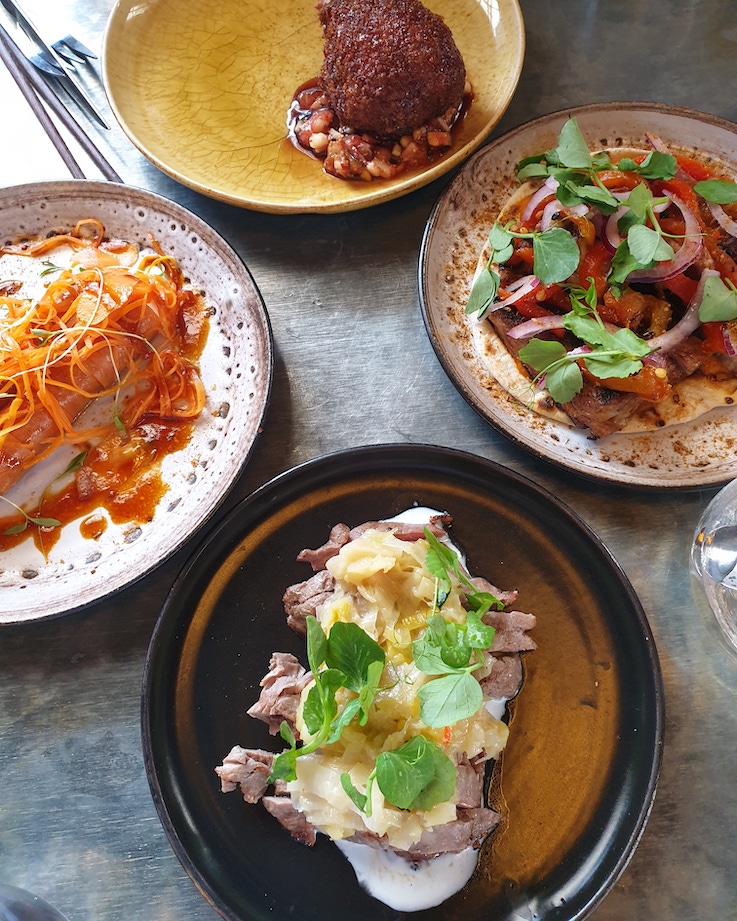 The Duck Father from Delmas was responsible for the Duck Leg, crumbed and served with fig stuffing and liquorice jus. Lamb Belly from Bapsfontein, served on a roti with a harissa paste and pickled red pepper. And, new to me, a Spider Steak, also from Bapsfontein, a hand sized muscle between the sirloin and the rump. The flavour of these two and the tenderness of fillet. Served with charred leeks, roast garlic and labneh. Two desserts we had were a new best dessert ever, a Guava Mimosa, a flaky water ice heavy with ripe guava and Ricotta, poached fig and macadamia butter. 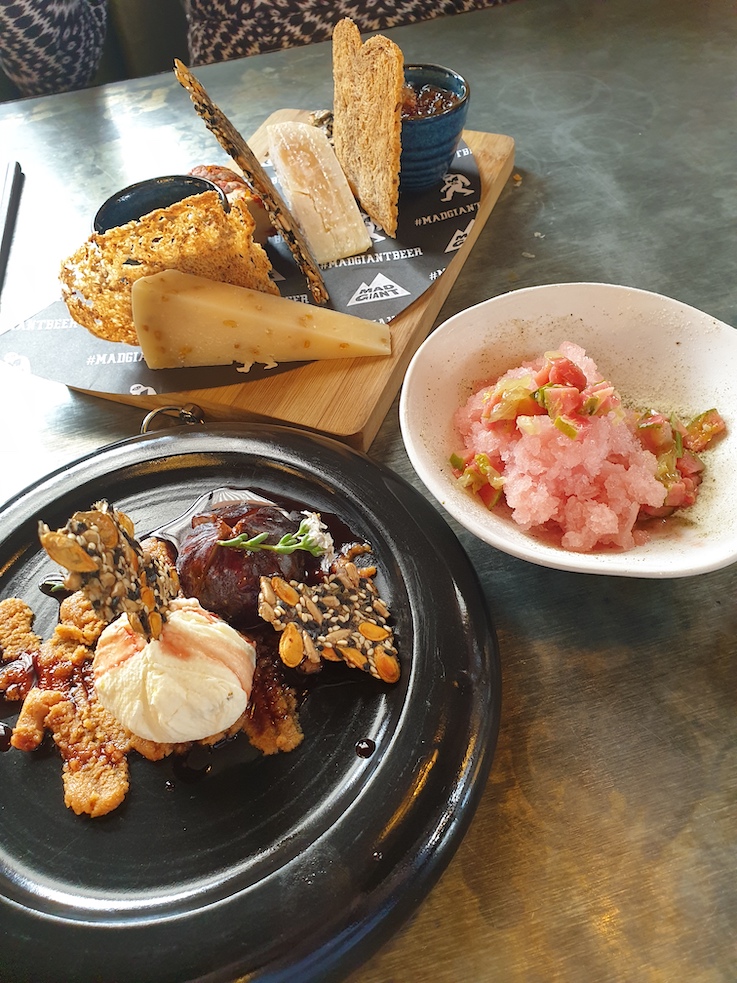 The wine list is eclectic, offered without vintages and a leaning towards wines from the Waterkloof Estate. The Cape Coral Mourvèdre Rosé was sublime, pale enough to be a Blanc de Noir. I would have liked a further choice of MCC, rather than two from one producer. Loved the idea of the Keet First Verse 2012 and the Boplaas Hanepoot. Excellent choice of spirits, and cocktails. And the full range of Mad Giant beers in three different tasting sizes. Don’t forget to take a pack or two home. 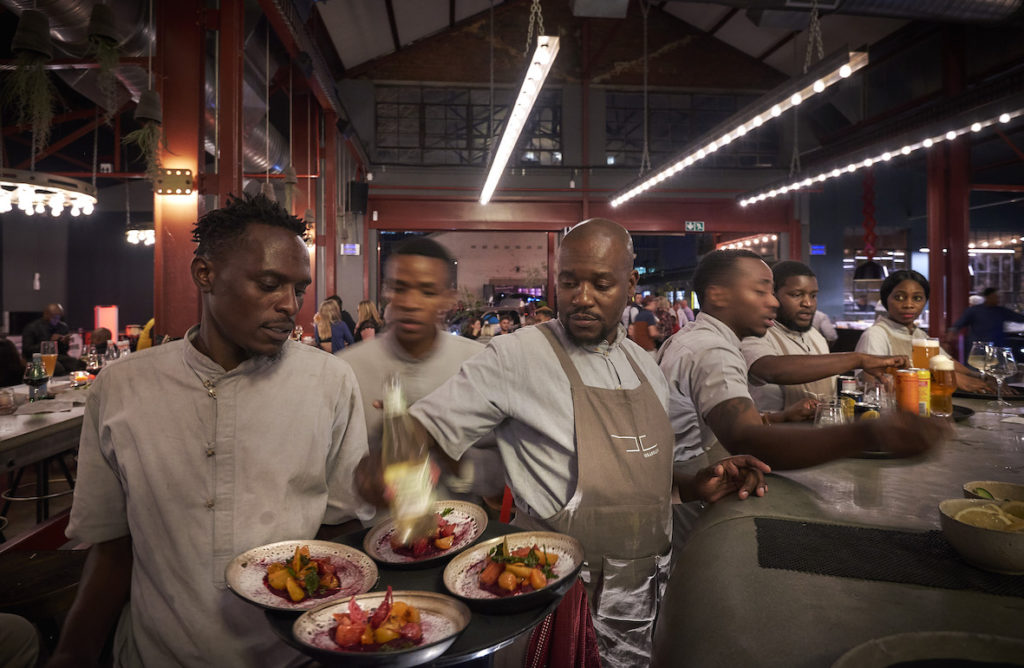 Off the the tables, Lucas in apron

I found the pricing very even-handed, just over eleven hundred rand before a tip. We had an elegant sufficiency. Well, slightly more if the truth be told.

This is a restaurant I’ll will be telling my friends about. It is a restaurant you, as a local, need to get on to your bucket list quickly and push it up to the top. If you visit Johannesburg, it must be on your restaurant list.

Our thanks to Jack Coetzee for his kind invitation to lunch.

And thanks to Random Hat Communications. 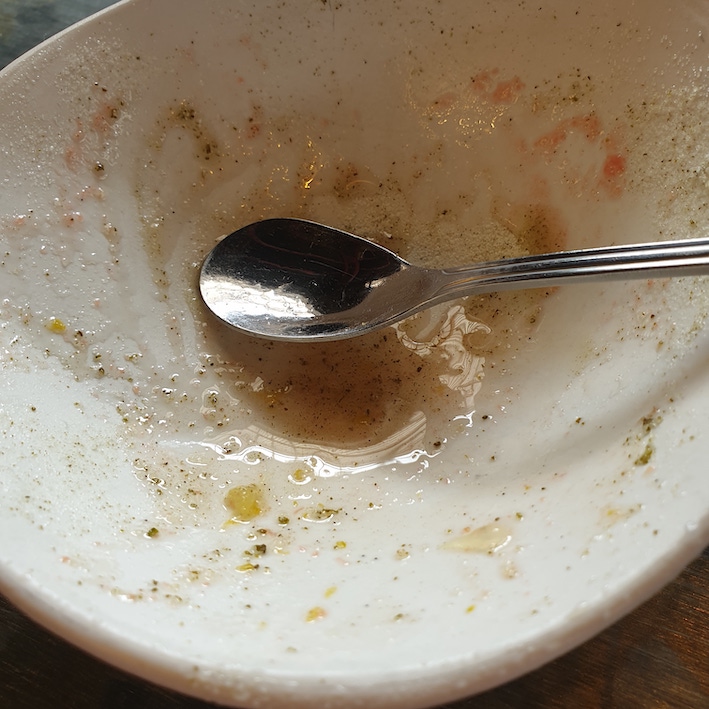