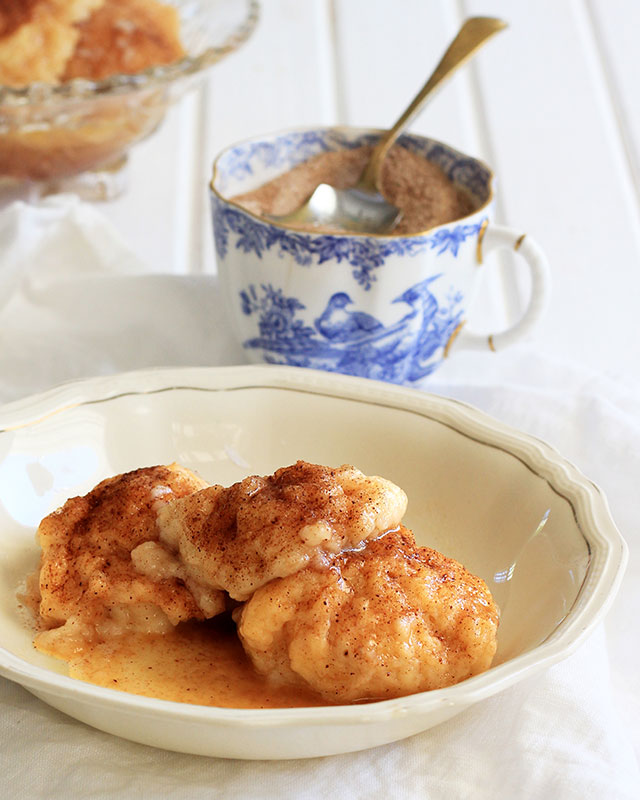 Lizet says, “Now this is the stuff of my childhood and I had naively assumed everybody would know a souskluitjie from a samoosa. Apparently not. So for those of you who haven’t heard of it, ‘souskluitjies’ is the South African name for old-fashioned cinnamon dumplings. A really filling, really warming, really easy pud that tastes and smells like Christmas morning. Oh, and did I mention really cheap? At less than R20 to serve six, it ticks that box too.”

All you need is…
for the dumplings
125g cake flour (4 heaped Tbs in grandma speak)
1 Tbs butter
1 egg
¼ tsp salt
1 Tbs sugar
1 tsp baking powder
2½-3 Tbs milk
cinnamon sugar (This is simply sugar mixed with ground cinnamon – add a teaspoon of cinnamon at a time and taste it to see how cinnamon-ey you prefer it. I like quite a lot, with one part cinnamon to 3-4 parts sugar.)

What you’ll do…
Bring four cups of water to the boil in a medium-sized saucepan (you need at least 5cm water). Add a quarter teaspoon salt to the water. Cream 1tbs sugar with 1tbs room-temperature butter. Add the egg and whisk well. Sift in flour, salt and baking powder and mix. Add just enough milk to the mixture to make it easy to spoon out – 2½-3 Tbs milk should do it. Drop 6 dumplings into the boiling water. They should be on the small side – the ones in my picture were each just half a tablespoon of batter. (Don’t be tempted to do too many dumplings in one go. They won’t have space to expand, the water temp will drop too much and you’ll have a stodgy mess.)

Put the lid on and boil for 10-12 minutes. Do NOT lift the lid while cooking. At the end of this, test to see if they’re cooked through. Use a slotted spoon to lift the dumplings out and place in a serving dish. Spoon a bit of cinnamon sugar over each dumpling and keep warm in your warming drawer. Pour the cooking liquid into a jug (keep it) and repeat the process with fresh salted water and the remaining batter. Once all the dumplings are cooked, return 2 cups of the cooking liquid to the saucepan. Add the butter, cinnamon and sugar and boil for three minutes, stirring to dissolve the sugar. Serve the warm dumplings with the syrup and plenty of cinnamon sugar so folks can help themselves to more. This is so simple. Do give it a try.