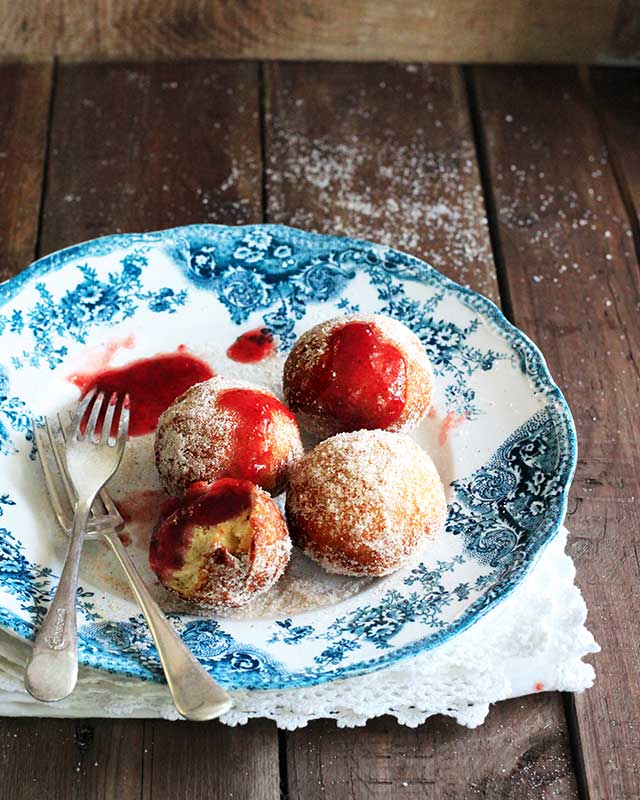 Not often that I get to match something to a sublime naturally sweet white wine as utterly delicious as this one, so I am very happy to tell you how to make the best ever jam doughnuts the Lizet Hartley way.

Lizet says, “I make them small, so you can demolish them in two dainty bites – because being a gourmand is one thing, being unfeminine in the process another. On the outside these doughnuts are coated in yummy castor sugar and cinnamon. And of course they beg for jam.

I used a deeeevine strawberry, lemongrass and ginger preserve from La Motte wine estate’s farm shop. Its slightly sour note was the perfect foil for the richness of the dough. And its runny (as opposed to gelatinous) texture was just right. Of course getting your hands on a bottle may prove to be tricky, so substitute it with Bonne Maman’s lovely raspberry preserve if need be. Just warm it a bit so it’s runnier.

You can either stab a hole in the doughnuts and, using a piping bag with a small nozzle, inject the jam. But being lazy, I took the easy way out. I piled them high on a plate with a bowl of the preserve for dipping and served them as dessert.

There were three of us. There were 20 doughnuts. It should have been plenty, but things got ugly. I guess that tells you all you need to know about this doughnut recipe.”

Add flour, sugar, butter and salt to food processor and blitz until butter disappears. Add yeast, milk and egg and blitz until it just forms a ball. Sprinkle flour on your work surface and knead dough until it comes together and is elastic and smooth. Place in a deep bowl brushed with vegetable oil and cover with cling film. Allow to prove until it has double in size (60-90 minutes depending on room temperature).

Once doubled in size, tumble dough onto a floured work surface and roll or press flat until it is 2cm thick. You can cut the dough with a knife, but I prefer to use a 4cm round cookie press to ensure my doughnuts are all exactly the same size. Shape these rounds into balls. You can try rolling them with your hands, but because the dough is so elastic, I find a pull-and-fold type action (like you’re tucking in sheets when you’re making a bed) produces better perfectly formed round balls.

Place balls in a deep tray brushed with vegetable oil and cover with cling film. Set aside to prove for the second time until the balls have doubled in size. (NB: you need to use a deep tray as there needs to be space between the plastic and the balls so they can rise. If you place them on a baking sheet, they have nowhere to go!)

Once they have doubled in size, fry them in medium warm vegetable oil. I find 4cm of oil is plenty. If your oil is too hot, the doughnut will brown too much on the outside and still be raw inside. You want them golden brown and cooked through, so fry just one doughnut initially and cut it open to see if it’s cooked inside. Adjust your oil temperature as needed. (TIP: Also turn them constantly as you fry them. If you fry them on one side until brown before you turn them, the law of physics messes with you and it’s hard to flip them over and keep the uncooked side facing down. Using a slotted spoon and a fork works best to keep the little critters under control.)

Once cooked through, remove and drain on kitchen towel. Then toss immediately in castor sugar mixed with plenty of powdered cinnamon. Either fill with jam once cool or serve with jam on the side.

Lizet Hartley at work in her kitchen