A sublime lunch at Glen Carlou 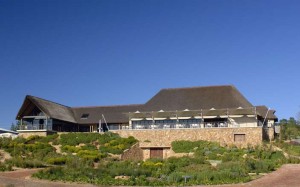 When the Swiss-based Hess Family Estates entered the wine industry in 1978, its mission was clear: to focus on the production of premium quality wines. Today, Hess Family Estates owns six New World cellars and vineyards: the Hess Collection and Artezin Wines in Napa, California; Sequana Wines in Russian River, California; Bodega Colomé in Argentina, as well as the major share in Peter Lehmann Wines, Australia and Glen Carlou Vineyards in the Paarl region of South Africa.

On a fairy tale weekend recently, Madeleine and I lunched at Glen Carlou Winery in Paarl.  I had eaten there several times before, but it was her first time there.  I have eaten some truly sublime dishes in the restaurant at Glen Carlou prepared by Chef Hennie van der Merwe and his team.  Hennie formerly owned a restaurant and had experience at the well-known Cellars-Hohenhort Hotel in Constantia and on board the magnificent cruise liners, the QE2 & QM2.  The menu contains some of Hennie’s more international dishes, but has some dishes which doff their caps at Cape Cuisine.  There is a children’s menu available.  The dessert choices will cause decision problems!  A cheese platter is available for those who wish to finish their wine at the end of the meal.  Apart from the wines produced on the Estate, wines from the other Estates owned by the Hess Family are also available which adds to the fun of the meal.  The view over Paarl Rock and the mountains in the distance has to go down as one of the best restaurant views in the Cape.

As a main course don’t go any further than the most delicious Slow Braised Pork belly with sweet coconut rice, baby turnip, crackling and soy reduction, suggested wine: Glen Carlou 2007 Syrah,  This is definitely the best pork crackling you will ever have!

Hennie has recently put in a new menu, so the dishes will have changes.  But do try Arco’s brand spanking new release, Glen Carlou Unwooded Chardonnay 2011.

The great treat of course at Glen Carlou is the wines of Arco Laarman who has been in the cellar on the Estate since 2000.  His wines have such depth and character.  Every bottle of Glen Carlou I have ever opened is totally sublime.  He makes delicious deep dark reds and characterful whites, both wooded and unwooded.  You just have to put a case or two in your boot before you leave.  And if you  can land a bottle of Peter Lehmann Riesling from Australia, jump at the opportunity, it’s a fabulous Riesling.

One of the special things you can do is to walk through the Hess Art Collection Museum.  Donald Hess began collecting art as a young man, following his intuition in the realm of art just as he did in the realm of business.  Initially comprising modern and contemporary works from European and US artists, the collection is now international in scope. Donald Hess has been recognized as one of the top two hundred art collectors in ARTnews magazine over the last two decades.   Hess initiated public access to his collection with the 1989 opening of The Hess Collection Winery in Napa Valley. The art museum there is housed in the original winery built in 1903. Hess Art Collection museums now include one at Bodega Colomé in Argentina and since 2006 one at Glen Carlou.

“With its magnificent scenery, wonderful soil and climate and world-class wines, taking my interest in wine to South Africa by obtaining Glen Carlou has always been an ambition I have been fortunate enough to fulfill,” Donald Hess says.  “It is thus a pleasure to see the current offerings at the winery extended to a venue displaying some of the art works I love.  The collection will change regularly and I hope that South African and international visitors to Glen Carlou will take as much pleasure in the art works on display as they do in the wines.”